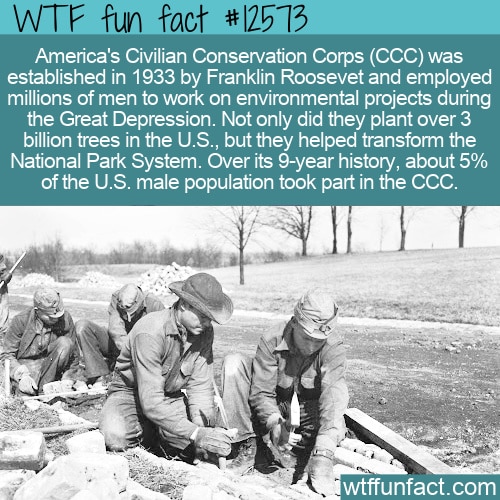 The Civilian Conservation Corps (CCC) was established in 1933 by Franklin Roosevelt as part of his New Deal. It took millions of young men, many of whom had been living on public assistance due to the Great Depression, and employed them to do manual labor around the country.

The CCC had many accomplishments during its 9-year tenure, such as building roads and bridges. But perhaps most memorable are the 3 billion trees they planted, the paths they created in state and national parks, and how they transformed the country’s entire park system.

Putting hundreds of thousands of struggling men to work on environmental conservation projects turned out to be one of Roosevelt’s big successes. It combated the unemployment rate and gave young men a sense of purpose.

Many of the workers came from the east, and the biggest challenge was getting them to work out west, where a lot of infrastructure work was needed. The U.S. Army stepped in to solve the logistical problems associated with transportation.

As of July 1, 1933, there were around 300,000 enrollees in work camps around the country, nearly all aged 18-25, and 1,433 total working camps had been established. The U.S. Forest Service, the National Park Service, and the Departments of the Interior and Agriculture hired CCC employees to fight forest fires, plant trees, clear and maintain access roads, re-seed grazing lands, implement soil-erosion controls, build wildlife refuges, fish-rearing facilities, water storage basins, and even animal shelters. Enlisted lasted 6 months, and men got on-the-job vocational training.

Workers got $30 per month as well as room and board, though they were required to send home $22 to 25 of their monthly earnings to support their families. Some corpsmen received vocational education while they served.

It’s estimated that some 57,000 illiterate men learned to read and write in CCC camps and their ranks included WWI veterans, skilled foresters, and even 88,000 Native Americans living on Indian reservations.

At its peak in August 1935, over 500,000 men were working throughout 2,900 camps. All told, historians estimate that nearly three million men (5% percent of the U.S. male population) took part in the CCC at some point. No women were allowed to serve, and Black Americans were forced to work on other projects, despite efforts to prevent discrimination.

The CCC program ended at the start of World War II as funds for the program were diverted to the war effort. But in the end, the CCC was responsible for over half the reforestation in the nation’s history.