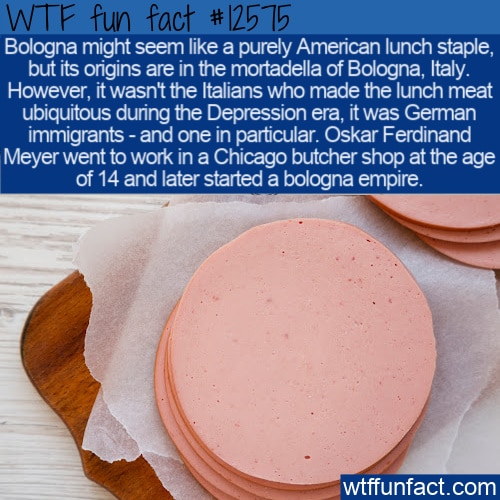 The Italians may have brought bologna to America, but there’s little resemblance to the mortadella meat of Italy. The meat became a household staple for just about everyone during the Great Depression since it was cheap. It continued to reign supreme on shelves after that because it was easy to make into lunch sandwiches.

When Americans think of bologna, we tend to think of those yellow packages and round slices. And that’s because of a German immigrant who began his career beginning at age 14 when he apprenticed with a Chicago butcher.

Oskar Ferdinand Meyer spent six years in Chicago meatpacking until he could afford to lease his own marketspace and put his skills to use. He had learned traditional European sausage-making techniques over the years.

That’s how what we now know as Oscar Meyer bologna began, and success came early because of a growing German-American immigrant population in Chicago. His company later created the technology for vacuum packing sliced meats to make lunch making much more effortless.

So while the Italians brought proto-bologna to America in the 18th and 19th centuries, it was young Oskar who took steps to make it mainstream. – WTF fun facts

Source: “How Lunch Became a Pile of Bologna” — Eater