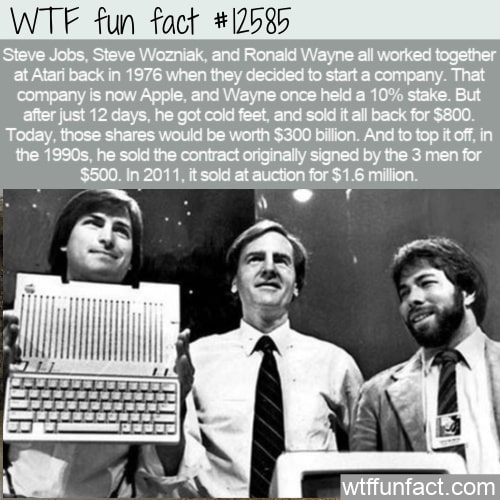 We’ve all heard of Apple co-founders Steve Wozniak and Steve Jobs. But do you remember the third co-founder, Ronald Wayne?

The trio founded Apple Computer Company (now Apple, Inc) in 1976. But while Wozniak and Jobs each owned 45% of the company, Wayne had 10%, which would make him the tie-breaker in any disagreements between the two Steves.

He was the administrative brains among the computer geeks. And like any good businessman, he wanted to mitigate his risks.

Funny enough, Wayne’s first business sold slot machines (and ran out of luck, going into debt that he had to pay off personally).

The three met when they all worked at Atari, and Wayne invited Wozniak and Jobs to his house to discuss the future of computers. Jobs suggested they start a business, with Wayne (who was the 41-year-old “elder”) at the time acting as “the adult in the room.”

Wayne drafted the partnership agreement and designed Apple’s first logo (which was replaced the following year). But he got cold feet as he considered the future of the business in light of his past failure and the resulting debt.

Legally, all partners in a company are responsible for its debt, so when Jobs made a purchase order with a $15,000 loan, Wayne started to get cold feet. The vendor Jobs purchased from wasn’t known for being speedy with their deliveries, and Wayne saw warning signs.

His job at Apple also wasn’t his passion – he enjoyed engineering and his slot machine designs. So he did what any intelligent businessman might do – he moved on to greener pastures. Well, at least they seemed greener at the time.

Renouncing his 10% of the ownership after just 12 days (though Wozniak’s account is that it took a few months), Wayne sold his shares back for $800.

Wayne says that he made the best decision he could with the information he had at the time, which is respectable. And while he retired to a trailer park to collect stamps and play penny slots, he insists he doesn’t regret the decision.

Had he stayed with the company, his life would have certainly been different. Those shares would be worth a mind-boggling $300 BILLION today. – WTF fun facts