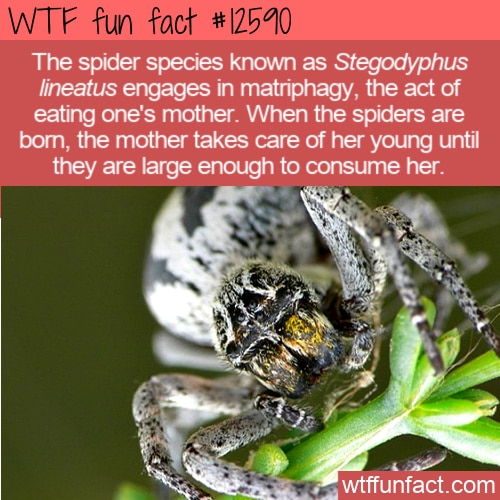 It may sound like just another day at the office for some mothers used to giving their all to their children, but some spider moms really do make the ultimate sacrifice for their young.

It’s called matriphagy, the act of eating one’s mother, and it’s rare. But it happens in a spider species called Stegodyphus lineatus.

These spiders only have one group of babies throughout their lives. And when these spider babies are born, they are entirely dependent on their mothers to regurgitate food and feed it to them so they can grow up.

And what does she get in return?

Well, to be fair, the moms don’t put up a fight. After about two weeks of motherhood, they allow their children to consume them, leaving behind only an exoskeleton.

The spiders are native to Israel, and research into matriphagy in this species showed another interesting thing. Females that had given birth actually started to digest their own tissues before their gruesome deaths. Now, that might be a sign that the species just wasn’t designed to survive motherhood. However, Dr. Mor Salomon, a postdoctoral fellow in entomology at the Robert H. Smith Faculty of Agriculture, Food & Environment of the Hebrew University of Jerusalem, also found that the ovaries and the heart were the last organs to degenerate.

It also seems that spider mothers know their time is limited because they stop maintaining their web after their babies begin to grow.

Please don’t assume that females who don’t give birth have it any easier. They also tend to sacrifice themselves when a member of the colony has babies. Researchers are still looking into whether this is conditioned behavior or part of the species’ biology. – WTF fun facts