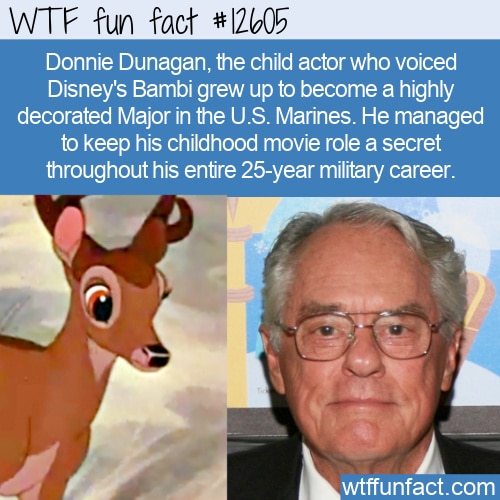 When Donnie Dunagan joined the Marines, he was eager to keep his past a secret. And he managed to do it for his entire 25-year military career.

That secret? As a child, he had a brief stint as an actor, and one of his roles was a voiceover for Disney’s Bambi! The film was released in 1942.

Drafted in 1952 during the Korean War, over the course of his career, Dunagan was promoted 13 times in 21 years (a Marine Corps record). He was also awarded two awards for Valor in Combat as well as the Purple Heart.

When interviewed by his wife, Donna Dunagan, for a Story Corps podcast, he described how closely he held the secret:

“I never said a word to anybody about Bambi, even to you. When we first met I never said a word about it. Most of the image in people’s minds of Bambi was a little frail deer, not doing very well, sliding around on the ice on his belly.”

As a boot camp commander, he was responsible for overseeing hundreds of recruits as well as the drill instructors. He recalled: “I just thought to myself, ‘I don’t think I want all these young Marines to start calling me Major Bambi.’ And I kept my mouth shut.”

The first military colleague to find out was a fellow Marine he had worked and fought for. The secret was uncovered after a personnel audit. Dunagan explained:

“He called me in at five-thirty in the morning, I will never forget it. I go in his office and he says, ‘Dunagan! I want you to audit the auditors.’ I never said a disrespectful word to this man in twenty years, I said, ‘General, when do you think I’m going to have time to do that?’ Then he looked at me, pulled his glasses down like some kind of college professor. And there’s a big, red, top-secret folder that he got out of some safe somewhere that had my name on it. He pats this folder, looks me in the eye, and says, ‘You will audit the auditors. Won’t you…Major Bambi?’”

It turns out Dunagan was right – that’s exactly what he would have been called had he let it slip during his fighting career! – WTF fun facts