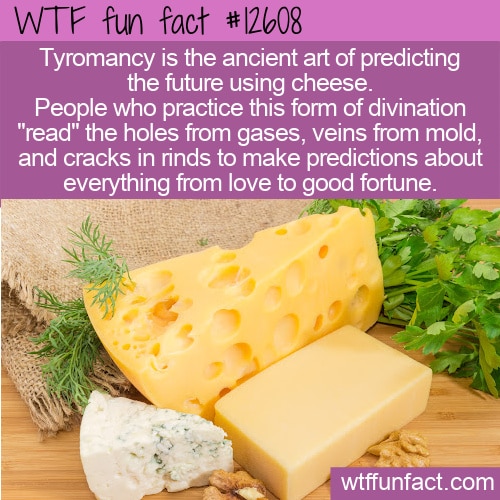 While the practice itself is not recorded in detail, at least one ancient source – Artemidorus of Daldis – refers to the practice of tyromancy, or predicting the future using cheese.

Humans have used all sorts of strange objects to try and read the future, including bones, tea leaves, and animal entrails. But we have to admit that cheese divination is new to us.

According to Mental Floss, the only recorded reference to tyromancy in the ancient world is from a skeptic, “the Greek diviner Artemidorus.” While he believed in divination, he “did not feel that cheese divination was very reliable, and included cheese diviners among his list of ‘false diviners,’ alongside dice diviners, sieve-diviners, and necromancers. (The interpretation of dreams and livers was far more dependable, he felt.)”

The practice of tyromancy involved reading the meaning of holes in a piece of cheese. In some cases, women would write the names of men on pieces of cheese, and the first to mold was thought to predict their ideal mate.

While there is scarce evidence for its practice, Ohio History Connection, a non-profit history organization, says:

“Tyromancy is the ancient art of divining the future through cheese, and has been used by various cultures around the world for centuries. By the 19th century, tyromancers would offer visitors a platter of different cheeses and determine their path based on which piece they were drawn to.”

Tyromancy is not the only cheese-based divination method. According to Interesly:

“Another method of Tyromancy was to write the possible answers to a question on separate pieces of cheese and then place them inside a cage along with a hungry rodent. Whichever piece the mouse ate first was the correct answer. This manner of divination was also a form of Myomancy.”

Frankly, we don’t expect to predict the future with cheese, but we’re not opposed to buying more cheese just in case. – WTF fun facts