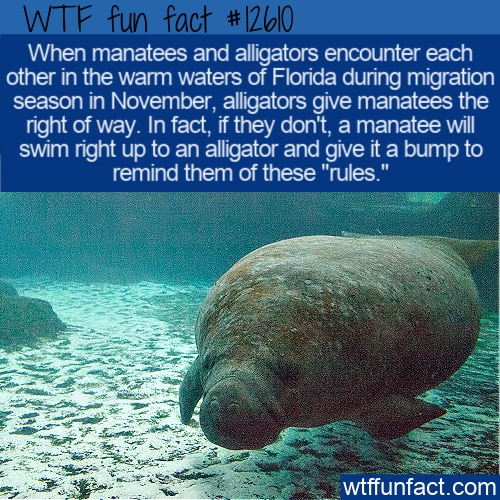 Manatees are often called “sea cows” because they’re big, slow, and gentle. And perhaps other animals have just learned to respect them for it.

We were surprised to find out that not only do manatees native to the Gulf of Mexico and the Caribbean Sea migrate to Florida each year for winter, but they become a well-respected part of the aquatic ecosystem.

In fact, even alligators will treat them like guests and give them the right of way if they swim through each other’s paths. There have been no recorded attacks on manatees by alligators, even though manatees can get a bit pushy when they don’t get their way. They’ll even swim up to and “bop” an alligator that does not yield.

While the alligators don’t know this, their gesture is helping save the endangered creatures, who have died in droves over the last decade.

And even Florida politicians seem to respect the manatees. In 1979, Florida Governor Bob Graham designated November as Manatee Awareness Month. Every governor has renewed the proclamation during their tenure.

If you’d like to see how well these creatures get along, check out the video below – WTF fun facts