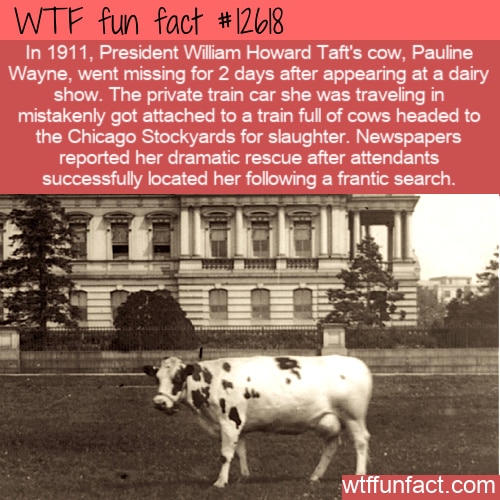 Until the late 19th century, presidents brought their own cows to the White House to provide milk. There was no dairy delivery in Washington DC at the time.

When President William Howard Taft’s cow Mooly Wooly died in 1909, it was replaced by Pauline Wayne, a 1500-pound Holstein-Friesian. She was a gift to the Taft family from the farm of Senator Isaac Stephenson of Wisconsin.

The 4-year-old black and white bovine was the last presidential cow, but by far the most famous. The media appears to have been obsessed with her. Her arrival was covered by The New York Times, and her exploits appeared in publications from The Evening Independent in St. Petersburg, Florida, to The Milwaukee Sentinel.

One particular bit of drama was covered far and wide. Pauline was visiting the International Dairymen’s Exposition in Milwaukee in 1911 (with her milk sold in souvenir bottles for 50 cents each). But on the trip home, she went missing.

We always figured it would be hard to lose a cow, especially the President’s cow. But it happened.

It turned out Pauline’s private car was accidentally hooked up to a train carrying cows to slaughter at the Chicago stockyards. Can you imagine the scandal?!

Luckily, after a series of frantic telegraphs from the dairy show, train attendants ended up locating Pauline’s car as newspapers reported how she “narrowly escaped death.” – WTF fun facts