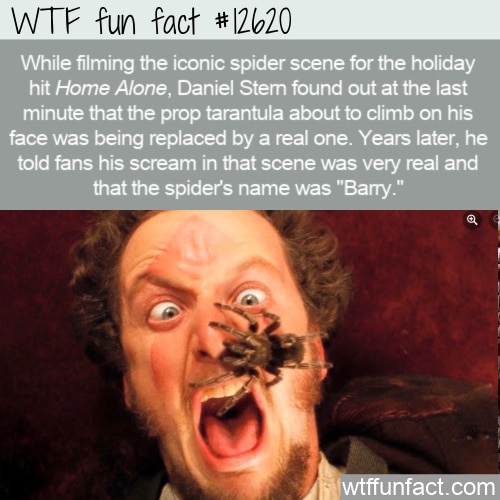 There have been some famous and controversial guest stars in the Home Alone movies, but this one takes the cake.

We know it came out a long time ago (1990, to be exact), but perhaps you’ve seen the original Home Alone movie recently. And if you have, you likely remember the scene when bad-guy Marv, played by Daniel Stern, gets caught up in Kevin McAllister’s (Macauley Caulkin) set of booby traps. In one particularly cringe-worthy scene, he ends up with a tarantula on his face.

Now, tarantulas are venomous, but that venom doesn’t do humans any real harm. The worst that can happen is that they bite you and it hurts. Still, most of us want to avoid that.

Normally, a life-like tarantula would be created by a props department for use in a movie. And Home Alone’s propmasters did, indeed, make a spider for the scene. It’s just not the one that ended up on David Stern’s face. That one was real. And his name was Barry.

“I’ve talked about the stunt guys doing crazy things, I’ve talked about my love of doing physical comedy, but one of the most surreal moments of the film was the scene with the tarantula crawling across my face. People who meet me are always curious if the tarantula was real, if my scream was real, and if I was scared, crazy or both. The answer to all three of those questions is “Yes.”

My memory might be off and I will happily stand corrected if anybody has better info but here is how I remember it:

When I first read the script and talked to Chris Columbus, I thought the tarantula in the scene was going to be a mechanical one and when I showed up on set, sure enough the incredible crew in the prop department had made a very life-like spider replica which could move a bit, as well as a version that didn’t move. I told them I thought I could help sell it, with my great acting abilities and all… They were polite but not convinced. To insure that the “gag” was going to work, they brought in a different crew member, this one from the animal wrangling department. He had a cage and in this cage was an exact replica of the replica that the prop department had made. But you could definitely see by the way it moved that this was no fake, but a creature of royalty in the natural world. I was a little intimidated for the first time in the movie. The wrangler introduced me to “Barry the Tarantula” (possibly mis-remembering his name, apologies). They had Barry crawl around on my hand and head. I asked if Barry was trained and was told they had been working with him for a few days but tarantulas are kind of tough to train. I asked if his poison had been removed, and was told that if the poison was removed, Barry would die. I said, “Right, but if the poison isn’t removed, then I’m gonna die. See where I’m going here?!” “Just don’t make any sudden, threatening moves and you’ll be fine.” “But I’m going to be screaming in Barry’s face. Do you think he’ll feel threatened by that?!” “Barry doesn’t have ears. He can’t hear. Relax. “

I think I made one last feeble attempt to honor the hard work of the prop department and use the replica, but once the director saw Barry in action, the Barry Action Figure was put on the sidelines. I remember Barry crawling around my face. I remember trying not to piss off Barry. Once I got used to him and what he was doing, he turned out to be a great scene partner. I think I felt comfortable enough to have let out that scream right at him in the scene, but there’s another legend that says I only mimed it and added in the scream later. (I would love for the powers-that-be at 20th Century Fox to release the original footage to see if I screamed or mimed, so we can settle this “controversy” once and for all – and the world can finally be at peace.) Either way, the scream came out pretty good and was an homage to the shower scene in “Psycho”. I then had to beat Joe Pesci with a crowbar. And we all know that even though it was pretend and funny and a fake crowbar, it’s a thousand times more dangerous pissing off Joe Pesci than pissing off a venomous spider that’s crawling on your face.

Here’s to Barry! The greatest tarantula I have ever acted with!”

Want to revisit the scene now that you know that’s a real spider? Here you go: