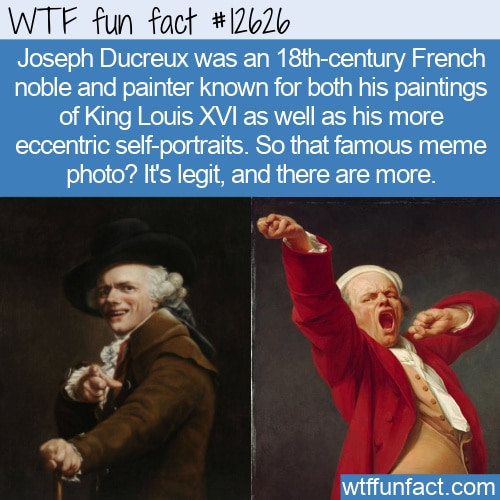 The painting by Joseph Ducreux that you may have seen in memes is a legit 18th-century painting titled Self-Portrait in the Guise of a Mocker. It happens to be a self-portrait and a rather unique style. At the time, paintings took enormous time to make, so goofy “selfies” might have seemed a waste.

However, Ducreux was keenly interested in the pseudoscience of physiognomy, the attempt to assess a person’s character from their facial features and expressions. Hence the interesting poses he struck in his self-portraits.

But Joseph Ducreux was a skilled oil painter. A miniature of Marie Antoinette he made in 1789 won him a baronetcy and the title of “First Painter to the Queen” of France.

Of course, his place in high society made him unpopular during the French Revolution, so he hid out in London for a bit. That’s where he created the last portrait of Kind Louis XVI before the royal was beheaded.

He returned to France after the revolution and continued his career as a painter, indulging in the self-portrait series at the time.

They may look silly, but to Ducreux, they served a scientific purpose. – WTF fun facts