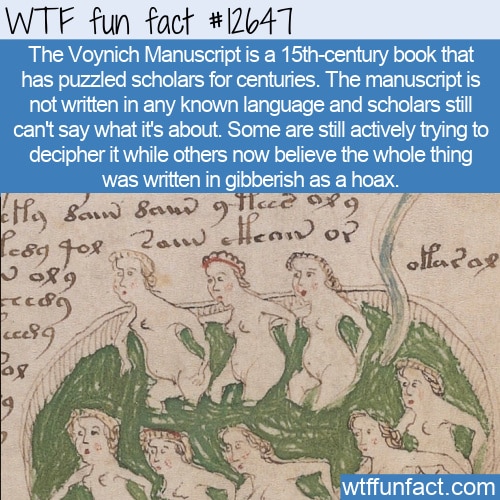 The Voynich manuscript is a mysterious book written in the early 15th century written in a language no one knows or can trace. Yet it’s 250-pages long.

The document resides in Yale University library’s special collections. It contains a mix of Latin and Arabic letters, and no one has ever been able to decipher it, though many have tried.

Recently, a German Egyptologist claims to have deciphered it, though it’s not the first time someone has made the claim.

According to The Art Newspaper:

“The actual translation of the Voynich-book will need a couple of years of work, even if specialists in the Hebrew language, who are well versed in medieval Hebrew and the terminology of botanical and medical texts, take over the analysis,” Hannig writes. “The character of the script, the pronunciation which one needs to get used to, the peculiarity and the vocabulary of the period will cause a lot of trouble even to a native speaker of [Hebrew]. But it will take a few years to translate, and there are few ways to know if the method he’s using is correct”, the German scholar said.

What we do know about the book is that it contains 240 pages of “bear illustrations of plants, floating heads, signs of the zodiac, fantastic creatures (including dragons), castles, women bathing, and astronomical symbols. Scholars have used these illustrations to organize the manuscript’s content into six major sections: botanical, astronomical and astrological, biological, cosmological, pharmaceutical, and recipes. However, without the ability to read the text, its true content has remained elusive. Even the name of the manuscript’s author remains a mystery.”

The Voynich Manuscript is named after Wilfrid Voynich, who discovered the mysterious book in 1912. – WTF fun facts