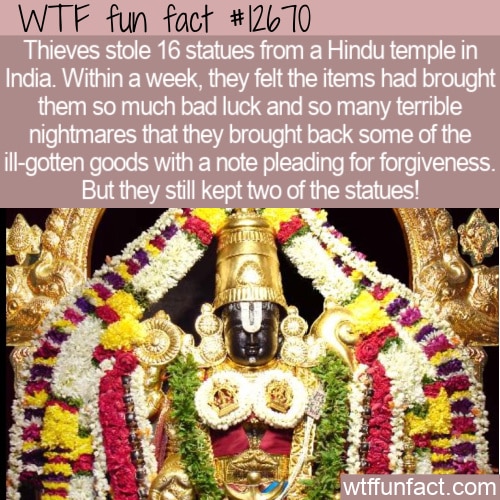 In May 2022, thieves unwisely stole 16 statues of Lord Balaji (an incarnation of the Hindu god Vishnu). And if you know anything about Vishnu, you’d know that was a particularly bad idea. Vishnu is known as the preserver and protector of the universe, and it is said that he will return to earth in troubled times to restore the balance of good and evil.

However, the belief is that Vishnu has been incarnated 9 times already and his 10th reincarnation will signal the end of the world. So, seriously, do not make him come down here!

Lucky for the rest of us, the thieves got some personal punishment rather than triggering the apocalypse.

Most of the statues were returned a week later to the temple in the Chitrakoot district in Uttar Pradesh, India along with a confession, apology, and plea for forgiveness. It turns out the thieves had been plagued with such terrible nightmares and bad luck during the time they held the statues that they felt they had no choice but to return them and come clean.

“We have been suffering from nightmares since we committed the theft and have not been able to sleep, eat and live peacefully,” the thieves said in the accompanying letter, the Times of India reported (in translation). “We are fed up with the scary dreams and are returning your ‘amaanat’ (valuables).”

Returning stolen temple items is actually somewhat common because of feelings of guilt and misfortune – but, somehow, they still justified keeping two of the stolen items!