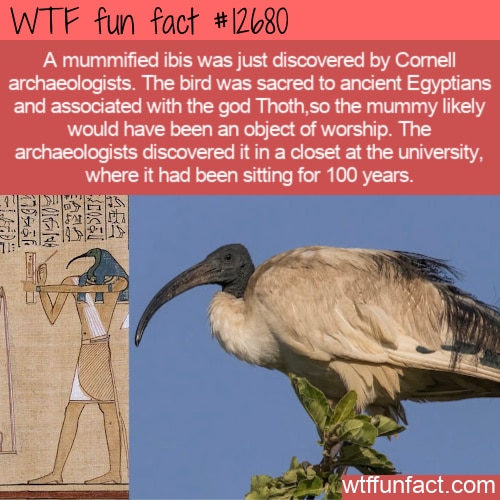 Archaeologists often get permission to dig at a site that includes permission to take whatever they find under the assumption that they will treat it well and restore it and hopefully make a discovery that tells the world a bit more about the history of that site.

But archaeologists often take more than they could ever handle, and things get stored away. Or, in some cases, people donate items to universities, and how they got these items is…how shall we say…somewhat fishy. The problem is that the home countries of these items don’t often get a chance to repatriate the objects that archaeologists ignore (and in some cases, they don’t have anyone with the expertise or desire to do that).

However, no one at Cornell can actually figure out how the mummy got there. Did someone from Cornell bring it back from Egypt? Was it part of a donation? Whoever does know has been dead for years.

But we do know that the little 2-pound mummy had been sitting around for about 100 years ago. They assumed it contained a mere hawk, which is presumably nothing special. And like so many things, it got stored away – in this case, in a closet (but perhaps it was a nice closet – we’re not judging the organizational strategy).

Recently, an archaeology graduate student at the university, Carol Anne Barsody was researching a project on how we can use technology to study objects without destroying them and how we can integrate these objects – which may look like nothing much on the outside – into museum exhibits that people can learn from. It sounds very cool (and would allow many more people to see objects that have been hidden away).

Frederic Gleach, the curator of Cornell’s Anthropology Collection, offered Barsody two little mummies that had been stored away. One contained twigs and the other the “hawk.”

Barsody and Gleach reached out to Cornell’s renowned College of Veterinary Medicine (CVM) to get a CT scan of the mummy so they could learn more about the bird inside. And it was only then that they discovered it was not a hawk at all, but an ibis, a long-legged bird that thrives in marshlands.

This is important because the ibis was worshipped in Egypt in relation to their god Thoth, who was often depicted with the head of an ibis. That means the mummy was likely worshipped as a sacrificial object. It wasn’t just some bird. Thoth was the god of reckoning, learning, writing, and the moon.

“Not only was this once a living creature that people of the day may have enjoyed watching stroll through the water,” Barsody said to the Cornell newspaper. “It also was, and is, something sacred, something religious.”

She also told the Cornell Chronicle: “The goal is to gauge the public’s readiness for exhibitions without the artifacts. That gets into bigger questions about repatriation, institutional collecting practices, access, and education in this post-COVID world, where you might not be able to actually get to a museum. I’m really interested in the multisensory aspects. Using not just your sight, but also feel, smell, hearing.” –  WTF fun fact