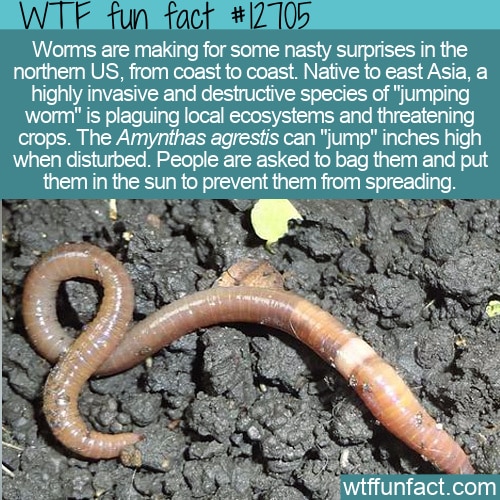 In a not-so-fun turn of events, people in the U.S. are concerned about an invasive species of worm that can reproduce on its own, destroy soil, and spread quickly.

Usually, worms are a vital part of ecosystems and help the soil provide nutrients to crops. But not the Amynthas agrestis, or Asian jumping worm. They’ve been troubling people since 2013 in the U.S., but they’ve been spotted far and wide now and farmers are concerned. They are native to east Asia, and Japan and the Korean peninsula in particular.

There are lots of ways worms can move around the world, but we’ve never seen them pose this kind of threat. More recently, they’ve been seen as far west as California’s Napa county (although to be fair, that’s actually closer to Japan).

We import a lot of beautiful plants from overseas for our gardens, so it’s no surprise the U.S. is now home to new kinds of worms. But these ones can cause long-term damage (and startle gardeners quite a bit!). They’re called “jumping worms for a reason.

According to The Guardian, the California Department of Food and Agriculture (CDFA) warned in a report:

“These earthworms are extremely active, aggressive, and have voracious appetites. True to their name, they jump and thrash immediately when handled, behaving more like a threatened snake than a worm, sometimes even breaking and shedding their tail when caught.”

Normally, we’d say let nature be, but it turns out that they may cost a lot of money (and even livelihoods) down the line since this isn’t the soil they’re supposed to be in. The Guardian warned: “Jumping worms can destroy a forest ecosystem by chewing through fallen leaves, in turn destroying the top layer of forest soil upon which many plants and organisms depend.”

The CDFA report continued the dire warning: “They are destructive and cause severe damage to hardwood forests, especially those consisting of maple, basswood, red oak, poplar or birch species that rely on thick layers of leaf litter that serve as rooting medium.”

Sometimes we don’t realize how important soil is to our lives, and these are capable of completely changing the nature of soil (and therefore the crops that can be grown in it).

The Guardian also provided some advice (since, as you likely know, even chopping a worm into pieces with your garden shovel isn’t going to do the job – in fact, it can just create more worms):

“Experts have recommended several strategies to detect and eliminate the worms, including using a mustard pour – a mixture consisting of water and yellow mustard seeds – over soil to drive out any worms to the surface, and covering moistened soil with a sheet of transparent polyethylene for two to three weeks until soil temperature exceeds 104F for at least three days, destroying the worm’s cocoons.”

You can also bag the worms and bake them in the sun – anything that keeps them from thriving and spreading. And you may want to double-check your potting mixes and mulches before you spread them around your yard. Even the wind can blow around their egg sacs, spreading them easily.

It may even be the case that over the last few years, leaf pick-ups that turn our autumn leaves into compost have helped spread the worms.

Want to see a jumping worm in action? Check it out:

Source: “‘Extremely active’ jumping worms that can leap a foot raise alarm in California” — The Guardian