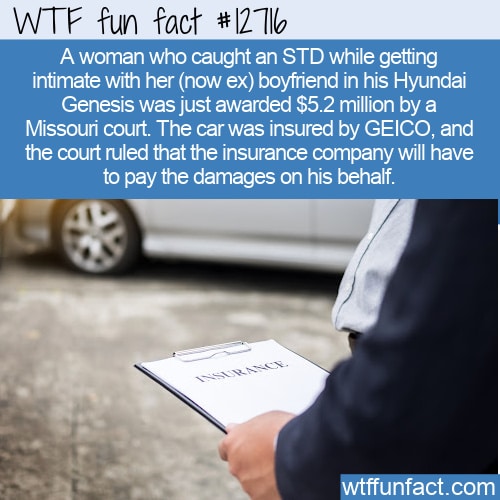 We’re not even sure where to begin here. But one thing is for sure – if you know you have a sexually transmitted infection, that’s something you tell your partner.

Of course, we’re not sure a Missouri man has learned his lesson after failing to tell his girlfriend he had human papillomavirus (HPV), an STD that can cause cervical and other types of cancers. That’s because it’s his car insurance company, GEICO, who will be paying the $5.2 million in damages for his transgression.

“According to court papers, the woman, identified in court records only as M.O., notified GEICO in February 2021 of her intention to seek monetary damages, alleging she contracted HPV, the human papillomavirus, from an insured member in his automobile. She contended the man caused her to be infected with the STD despite being aware of his condition and the risks of unprotected sex. The insurance company declined the settlement, sending the case to arbitration.”

Of course, GEICO appealed the verdict, but the Missouri Court of Appeals just upheld the settlement and their liability.

“In an opinion issued Tuesday, a three-judge panel found that the judgment entered against GEICO General Insurance Company through earlier arbitration proceedings was valid. The insurance companies sought to undo the action, claiming errors were made in Jackson County Circuit Court and the settlement agreement was not done in line with Missouri law,” writes Yahoo News.

The verdict was first handed down in May 2021, when an arbitrator found that “the man and woman had sex inside his vehicle that ‘directly caused, or directly contributed to cause’ the HPV infection. The man was found liable for not disclosing his infection status and the woman was awarded $5.2 million for damages and injuries to be paid by GEICO.”

The appeals court simply found that GEICO had no legal standing to try to relitigate the case. — WTF fun facts