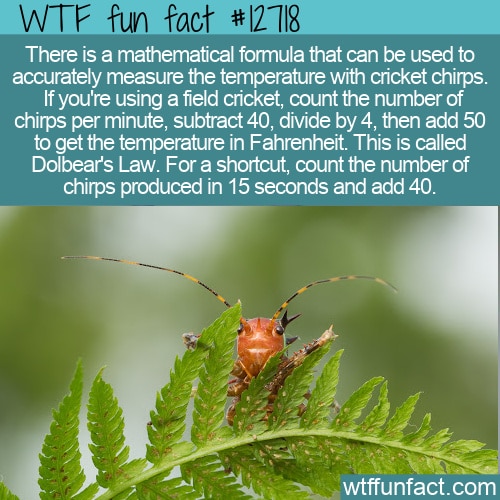 Let’s get one thing out of the way up front. While we call the method of measuring temperature using cricket chirps “Dolbear’s law,” the idea was first laid out in 1881 by Margarette W. Brooks. Her report “Influence of temperature on the chirp of the cricket” was published in Popular Science Monthly, it just wasn’t noticed until after Amos Dolbear published an 1897 article called “The Cricket as a Thermometer” 16 years later.

Regardless, it’s known as Dolber’s law, and it states that there is a connection between the air temperature and the rate at which crickets chirp. And it’s accurate for the field cricket within about 1 degree Fahrenheit.

It’s kind of like counting the seconds between lightning strikes and thunder, except way more inconvenient.

However, it is true that crickets chirp more speedily as the weather warms up. Dolbear realized this because crickets chirp consistently – that makes it possible to use the numbers in an equation.

In the original paper, Dolbear said you can get the approximate temperature in degrees Fahrenheit based on the times a cricket chirps in 1 minute – but you have to do some more math.

If you want a shortcut for Celcius, you can use the number of chirps in 8 seconds and add 5.

Of course, there are many types of crickets, and Dolbear realized they each had a different rate of chirping. So he created new equations for other species. The problem for us is that we have to know which type of cricket we’re dealing with.

In fact, the common field cricket really isn’t the best cricket to use since its age, and whether it’s mating season can also affect the speed at which they chirp (so they’re not entirely consistent). But they’re probably good enough for a quick experiment. –WTF fun facts

Source: “How to Use Crickets to Calculate Temperature” — Thought Co.