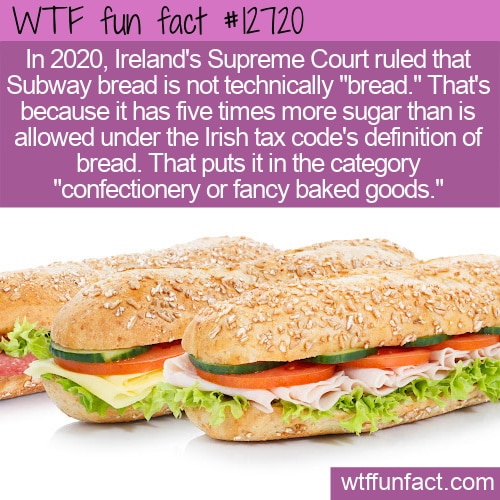 We’ll spare you some of the legal jargon, but we did actually read the 51-page judgment of an Irish court declaring that the bread used by restaurant chain Subway is now basically considered a confectionary in Ireland.

It wasn’t exactly riveting, but it was enlightening. And to summarize – it all had to do with paying taxes. Otherwise, we doubt Ireland would have bothered to consider it any more closely. And no one is saying you can’t call it bread – the judgment is only referring to how the bread is categorized for tax purposes.

This started when an Irish Subway franchisee, Bookfinders Ltd. filed a suit claiming that they were due a refund for value-added tax (VAT) payments between January 2004 and December 2005.

Their argument hinged on 2 paragraphs of the Value Added Tax Act of 1972, which described which goods and services should have VAT added to them. Bookfinders claimed that the majority of their goods fell into the category requiring a 0% rate (rather than the 13.5% they had paid).

That category includes: “chocolates, sweets and similar confectionary (including glacé or
crystallised fruits), biscuits, crackers and wafers of all kinds, and all other confectionary and bakery products whether cooked or uncooked, excluding bread…”

And “bread” is specifically defined as “food for human consumption manufactured by baking dough composed exclusively of a mixture of cereal flour and any one or more of the ingredients mentioned in the following subclauses in quantities not exceeding the limitation, if any, specified for each ingredient…”

To spare you more jargon, we’ll just say that the subclause in question is the one that says that in order to be considered bread, the weight of any fat, sugar, or “bread improver” cannot exceed 2% of the weight of the flour included in the dough.

It actually gets pretty complicated since there are different tax rates for different items and part of the argument is about averaging out tax rates, how tax rates might differ for businesses offering primarily take-out goods, and whether the temperature of the food makes a difference when it comes to taxing it.

This might be the very best (and by best we mean absurd) sentence: “They [Bookfinders] also submitted that the 1972 Act breached the principle of legal certainty by making the difference between ambient air temperature and the temperature of the food central to their VAT classification.”

Anyway, in the end, the fact that Subway’s bread had too much sugar in it (5 times as much as allowed by the tax code), means it is not considered bread for tax purposes.

Subway was pretty miffed at the implication that their bread was not bread, saying:

“Subway’s bread is, of course, bread. We have been baking fresh bread in our restaurants for more than three decades and our guests return each day for sandwiches made on bread that smells as good as it tastes.”

Our favorite commentary on the matter is this Tweet:

If anything, people got a warning that their sandwich bread had a lot of sugar in it, but there doesn’t seem to be much proof that anyone cared. — WTF fun facts

Source: “For Subway, A Ruling Not So Sweet. Irish Court Says Its Bread Isn’t Bread” — NPR