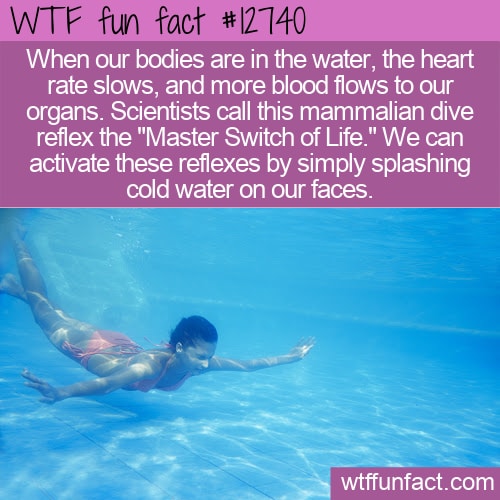 The Master Switch of Life is a phrase coined by Swedish researcher Per Scholander in the 1960s.

His research took place in the U.S. the United States where he studied just how being underwater would affect humans. He had already studied Weddell seals and found that the creatures seemed to gain more oxygen the longer they were underwater.

To see if the effect might be the same in humans, he put volunteers in a water tank and monitored their heart rates as they dove to the bottom of the tank. Immediately, the volunteers’ heart rates decreased.

Then he asked them to do some exercise at the bottom of the tank to try and raise their heart rates but to no avail. Being underwater continued to lower everyone’s heart rate, meaning they also needed less oxygen (the opposite of what happens on land when we exercise). In addition, when the volunteers were underwater, their blood began flowing away from limbs and towards vital organs (which also happens in seals).

When blood flows to the heart and brain, they stay oxygenated longer, meaning we need less overall oxygen for our bodies to continue to function.

The mystery of water

That’s when he wondered why water has such an unexpected effect on us.

It turns out that the more we dive, the more blood can penetrate the cell walls of our organs to counteract external pressure.

And here’s the really cool part, according to TED:

“Scholander found that a person need submerge only his face in water to activate these life-lengthening (and lifesaving) reflexes. Other researchers tried sticking a hand or a leg in the water in an attempt to trigger the reflex, but to no avail. One researcher even put volunteers into a compression chamber to see if pressure alone would trigger a similar diving reflex. No dice. Only water could trigger these reflexes, and the water had to be cooler than the surrounding air.”

A splash of cold water

All we need to do is splash some cold water on our faces to flip what he called this “Master Switch of Life.” Cool water basically makes us more amphibious and produces a physical change in our heart rates. That certainly explains why cold water feels so refreshing!