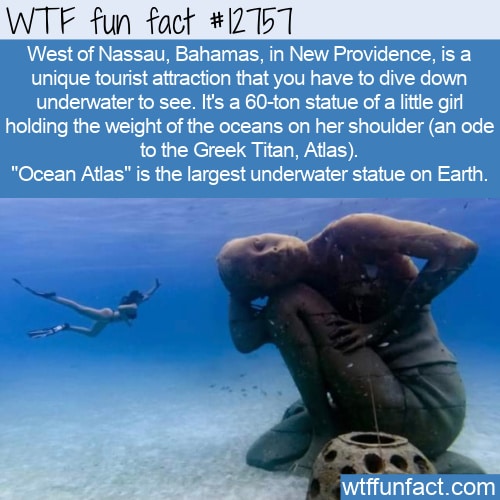 Have you ever wanted to see a famous statue but didn’t want to wait in line?

Well, how do you feel about going to the Bahamas to see it?

Ok, NOW, how do you feel about diving into the crystal clear ocean about 16 feet down to see it?

If you’re still thinking “this sounds great!” it might be time to book a trip to Nassau, Bahamas.

What, exactly, is the underwater statue “Ocean Atlas”?

According to Culture Trip (cited below): “You’ll find Ocean Atlas, a spectacular underwater sculpture by Jason deCaires Taylor, off the western coastline of New Providence, which has the largest population of any island in the Bahamas. It’s also where you’ll find the Bahamian capital, Nassau. Ocean Atlas is the world’s largest single underwater sculpture, and it doubles as a navigational aid, with a flag attached to the top poking above the water.”

The sculpture isn’t of the Greek god himself, but of a little girl carrying the weight of the ocean on her shoulders.

No mercy from Zeus

If you remember being taught about ancient Greek gods and goddesses, Atlas was a Titan – one of the deities who came before the ancient Greek gods. When the Titans tried to fight the gods, Atlas’ punishment from Zeus (who was, let’s face it, a real jerk) was being forced to hold up the heavens for eternity.

The statue is just a nod to the myth, and the subject is a local Bahamian girl. She can be viewed from just 16 feet beneath the clear water, so snorkeling or scuba diving will give you a great view of the piece which weighs 66 tons.

The coolest thing about the “Ocean Atlas” is that it’s made from pH-neutral materials and does not damage the surrounding ocean environment (other than draw tourists). it was actually designed to draw divers away from more popular spots so the reefs and aquatic life could start to recover.

According to the artist’s website, the materials are stainless steel, pH-neutral cement, basalt and aggregates.

It’s just not an option to close some of those other sites since many tourists go to the Bahamas just to dive and see the reefs.

The VERY coolest thing about “Ocean Atlas” is that it is now breeding its own ecosystem as wildlife is attracted to it and it serves as an artificial reef that houses some coral (which is what gives reefs their color).

It’s also not super easy to get to, so you have to rent a charter boat and follow directions pretty closely in order to see her. In other words, humans have to behave responsibly around the statue so it’ll be there for the oceans and the people who live above them to enjoy. – WTF fun facts