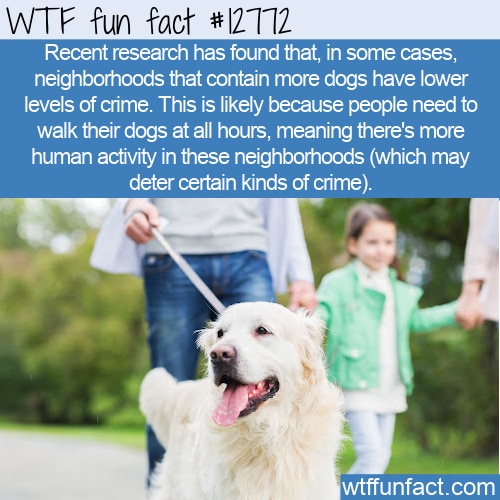 Remember McGruff the Crime Dog? Ever watch Paw Patrol with your kids? Well, it turns out dogs really do take a bite out of crime – just not in the way we expected.

The Pros of a Paw Patrol

Recent research in the journal Social Forces has found that neighborhoods that contain more dogs have lower levels of crime. But the paper, titled “Paws on the Street: Neighborhood-Level Concentration of Households with Dogs and Urban Crime,” found that it wasn’t the dogs themselves that deterred criminals.

Based on the work of Jane Jacobs, this research adds to the idea that “eyes on the street” can (but don’t always) help deter bad actors. That’s a plus for communities where people get out of their houses and are seen by neighbors. (But it’s obviously not that straightforward, and Jacobs failed to take into account race and class in much of her research.)

Eyes on the street

Nevertheless, the new research suggests that in many neighborhoods, the presence of community members makes a neighborhood less likely to seem like a target for crimes such as theft. Not only do neighbors get to know each other better and establish trust, but more eyes mean more potential reporters when people who see something wrong.

Of course, we’ve seen reporting of “something wrong” go sideways in many cases, especially when it comes to situations that involve race and class differences. We’ve also seen that a police response isn’t the best way to keep crime down. So this research just provides a general sense of how things might work for some neighborhoods.

So what’s the deal with dogs?

Dogs come into play because people need to walk them – and people do this at all hours of the day. Neighborhoods with dogs tend to have a lot more human activity out on the sidewalks. In general, the evidence showed that this was largely a good thing when it came to deterring crime.

The researchers found that neighborhoods with higher concentrations of dogs tended to report less robbery, homicide, and aggravated assault rates (as long as “eyes on the street” came with an increased level of trust).

As always, it’s important to note that the researchers found a correlation between dog ownership and less crime. This is not the same is causation – meaning we can’t say that owning dogs leads to less crime until there’s far more evidence. – WTF fun facts

Source: “Dogs Could Be Lowering Crime Levels in Your Neighborhood. Seriously” — ScienceAlert