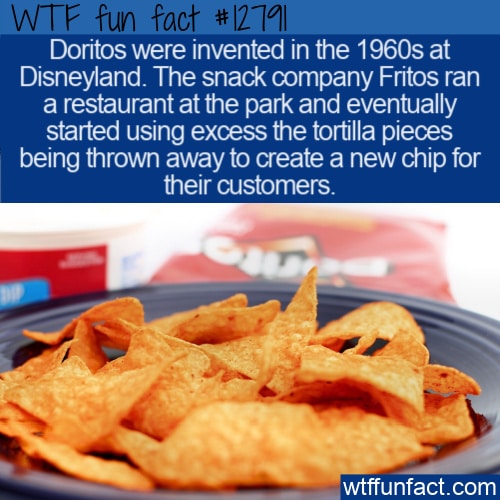 Actually, the interesting question isn’t when were Doritos invented but where. And those answers are: in 1960s, and at Disneyland of all places!

The invention of Doritos

Not only were Doritos invented at Disneyland, but they also started off as trash.

Doritos is a Spanish word meaning “little pieces of gold.” And these valuable little things started out their lives as pieces of tortilla thrown out at Disneyland’s Mexican restaurant in Frontierland, called Casa de Fritos. (The restaurant is now called Rancho del Zocalo Restaurante).

As you may have guessed, that early restaurant was owned by one of Disney’s corporate sponsors, Fritos (another delicious snack).

From trash to treasure

According to the Disney blog Walt’s Disneyland (cited below: “All non-Fritos ingredients served at Casa de Fritos, such as the tortillas, meat, beans, and fresh produce, were supplied by Alex Foods…

And it was a salesman for Alex foods who “noticed that Casa de Fritos was tossing unused tortillas in the trash at the end of each day” in the 1960s. “He suggested that the cook cut the surplus tortillas into triangles, deep fry them, and season them in the style of a Zapotec Mexican snack called totopos. The cook took the salesman’s advice and fried up the first batch of what we now know as Doritos.”

Once the chips became popular at Disneyland, Fritos realized they might have greater commercial success.

The invention of mass Dorito production

When a Frito executive tasted the new treat in 1964, he asked Alex Foods if Fritos could mass produce the snack. And they were so popular that Alex Foods could not keep u with demand.

That’s when Frito-Lay took over Doritos production at its Tulsa, Oklahoma plant for nationwide distribution in 1967. And the rest, as they say, is history! – WTF fun facts