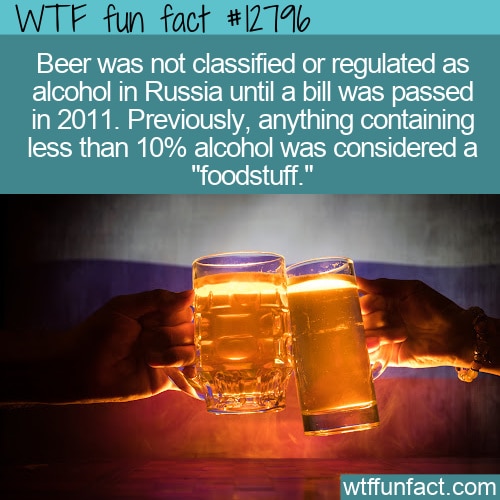 Until 2011, any drink with less than 10% alcohol was not really considered alcohol. Instead, it was a “foodstuff.” That made beer more of a soft drink, of sorts. It wasn’t until 2011 that Russian then-President Dmitry Medvedev signed a bill that officially classified beer as alcohol in 2011.

Now, that doesn’t mean Russian kids were drinking beer and calling it a Coke. It was all about who and how regulated beer could be in Russia. And we know Russians like their vodka, so they’re used to some thing a little bit stronger.

Once the law was signed, it allowed ministers to control the sale of beer in the same way they did spirits.

Overconsumption of alcohol is a problem in many places in the world, but Russian alcohol consumption at the time the bill was signed was twice the critical level set by the World Health Organization.

The 2011 bill likely came in response to a soaring interest in beer in Russia. And it didn’t seem to be for the same reasons we saw a beer Renaissance in the states. In Russia, it was seen a healthier alternative to spirits. So perhaps people just needed reminding that it was, in fact, still booze.

According to a BBC News story at the time (cited below): “Over the past decade, beer sales in Russia have risen more than 40% while vodka sales have fallen by nearly 30%. Correspondents say it is common to see people swigging beer in the street and in parks as if they are drinking soft drinks. It is not restricted to certain stores and is sold around the clock.”

To bring the consumption of beer under control, the Russian beer industry saw a 200% tax hike by ministers. That would probably discourage our drinking habits too!

While the new law was signed in 2011, it did not go into effect until 2013 and was set to “stop alcohol being sold in unlicensed kiosks, ban its sale from stores between certain hours and restrict its advertising.” – WTF fun facts