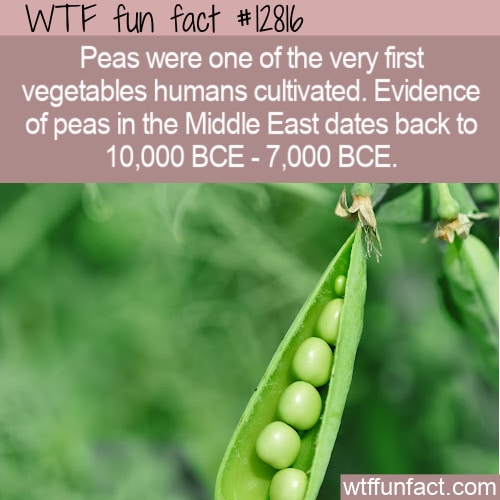 No matter how you feel about peas on your plate, it’s hard to deny that they’re one of the most important vegetables in mankind’s history. If we want to make the case that civilization starts when humans settle down to become farmers rather than hunter-gatherers, then peas are a major part of that story. Peas are the oldest vegetable – or one of the oldest – mankind has cultivated.

Peas have been found in Stone Age settlements roughly 8000 years old, but it’s likely that in some parts of the world (namely the Middle East – and Iraq and Afghanistan, specifically) they’re older than that.

But we doubt Stone Age kids had the ability to push away their peas and refuse to eat dinner.

Of course, peas would have looked and tasted different thousands of years ago. As we cultivate vegetables, we tend to choose the ones that match either our taste buds or our ability to grow lots of them (preferably both).

Genetic analysis indicates that kale, cabbage, broccoli, cauliflower, and Brussels sprouts were all cultivated from the same plant between 8,000 and 10,000 years ago.

Fruits are a different story. Yes, they’ve changed a lot from their ancient and even prehistoric counterparts, but we can find evidence of dates, plums, and of course apples, dating back 30,0000 to 40,0000 years.

So, while we don’t know if the so-called “Caveman” (aka Neandertals) ate exactly what the “caveman diet” says they did, we do know they had a bit of a sweet tooth.

According to Slate: “They definitely ate fruit. Last year, paleoanthropologists found bits of date stuck in the teeth of a 40,000-year-old Neanderthal. There’s evidence that several of the fruits we enjoy eating today have been around for millennia in much the same form. For example, archaeologists have uncovered evidence of 780,000-year-old figs at a site in Northern Israel, as well as olives, plums, and pears from the paleolithic era. Researchers have also dug up grapes that appear to be 7 million years old in northeastern Tennessee (although, oddly, the grapes are morphologically more similar to today’s Asian varieties than the modern grapes considered native to North America). Apple trees blanketed Kazakhstan 30,000 years ago, oranges were common in China, and wild berries grew in Europe. None of these fruits were identical to the modern varieties, but they would have been perfectly edible.”

But veggies are another story. Turns out those needed more work before people liked them.