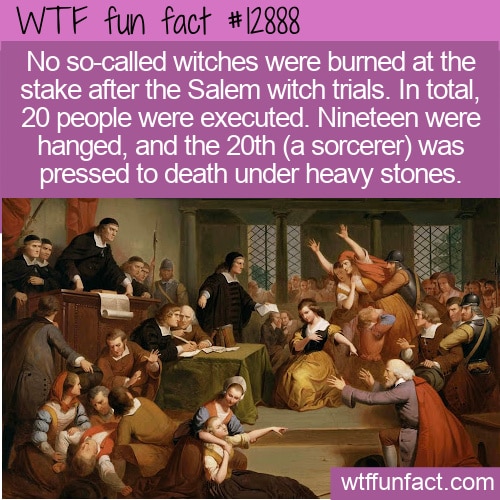 So what happened at Salem if not witch burning?

Accusations of witchcraft started when a group of young girls in Salem Village, Massachusetts experienced seizures and fits of screaming and a local doctor diagnosed them as having been the victims of “black magic.”

It was a Puritan settlement, and over the following weeks and months, the accusations spread and consumed people until they found someone to blame.

By the end of the trials, twenty people were executed as witches – most, but not all, were women. (It’s also common to believe the trials executed many more people than 20, but that’s simply not true. However, more were found guilty.)

Nineteen of the “witches” were executed according to English law (America was still a colony at the time). That meant being taken to the gallows in order to die by hanging.

The 20th convicted “sorcerer,” an elderly man named Giles Corey did meet a more gruesome end after refusing to enter an innocent or guilty plea. However, he was not burned at the stake either. Instead, he was pressed to death beneath heavy stones.

Other so-called sorcerers died in jail while awaiting trial.

Where does the burning-at-the-stake legend come from?

Burning witches at the stake was not an American phenomenon, but it did happen in Europe. People likely get it mixed up by assuming all witchcraft trials happened at roughly the same time and in the same way.

Medieval European witch trials often ended in execution and the Holy Roman Empire’s “Constitutio Criminalis Carolina” did state that the punishment for witchcraft was punishment by fire.

The real witch hunt hysteria happened across areas of modern-day Germany, Italy, Scotland, France, and Scandanavia and was at its height between the 15th and 18th centuries. Historians believe over 50,000 (!!!) people were executed as witches during this time alone in Europe.

However, burning at the stake still didn’t appear to be the typical method of execution. Most witches and sorcerers were beheaded. However, in order to keep their bodies from emanating some sort of black magic sorcery, the bodies were often burned.

Source: “Were witches burned at the stake during the Salem Witch Trials?” — History.com