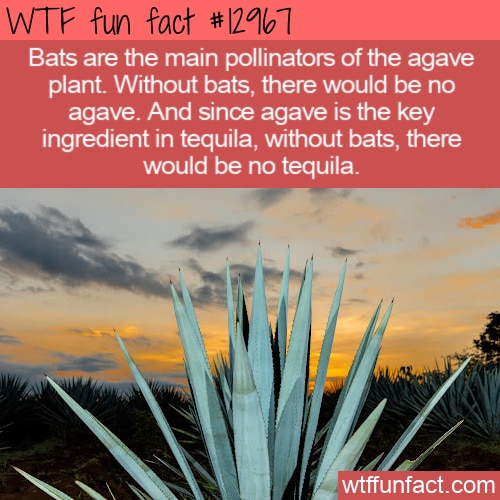 There’s a little-known but critical relationship between bats and tequila. In fact, without bats, we may not be able to create tequila at all!

How are bats and tequila connected?

If you’re a tequila fan, you probably know the crucial ingredient in the spirit is agave. This spiky plant is native to the desert regions of North and South America (but mostly Mexico). Agave nectar is also harvested to be used as a sweetener.

One of the many interesting things about the agave plant is that it has very few natural pollinators. (And you likely know that in order for plants to produce, they need to be pollinated by things like birds, bees, etc.)

The agave plant’s primary pollinator is bats. No bats, no agave. No agave, no tequila.

Is the tequila supply in danger?

To make matters even more complicated for agave plants, only a few species of bats are pollinators. These bats are being threatened by industrial farming and other threats to their natural habitats.

But while the bats and agave plants are increasingly threatened, our thirst for tequila has only gone up. According to NPR (cited below), the tequila industry has grown by 60% over the last decade. That means we need more agave plants than ever.

You might think that industrial farming would simply increase the amount of agave being grown, but it hasn’t worked out that way.

NPR interviewed Micaela Jemison of Bat Conservation International, who said that the problem with commercial agave production is that agave stalks are harvested before they can reproduce. “That means no tasty pollen for hungry bats. And instead of plants that reproduce through bats spreading pollen from stem to stem, major tequila companies use cloned agave.”

If you only care about tequila, you might not think this is a big deal, but there are some major unintended consequences of handing a natural process over to a business.

“Growing genetically identical plants is easy and cheap for big companies, but cloned agave is vulnerable to fungus or disease that could wipe out entire crops. Bats can solve this problem by creating genetic diversity. Instead, their ecosystem has been disrupted. Fewer agave plants are allowed to flower and growers use powerful agrochemicals that can hurt the three kind of bats that feed on agave.”

To help spread appreciation for the relationship between bats and tequila, the Tequila Interchange Project (which is made up of bartenders, scientists, industry consultants, and plain old tequila fans) is trying to promote Bat Friendly Tequila and Mezcal™. These approved brands give some of their proceeds to agave farmers who welcome the bats and help maintain their populations.

The coalition notes that “Given that Tequila is a two billion USD a year industry, and that the economy of 40,000 families is linked to blue agaves (and to bats and other pollinators), it is in the best interest of all stakeholders, from producers to the government to the individual consumer and everyone in-between, to protect the future of tequila and mezcal agaves by adopting sustainable practices and protecting pollinators and genetic resources.”

Source: “Bats And Tequila: A Once Boo-tiful Relationship Cursed By Growing Demands” — NPR