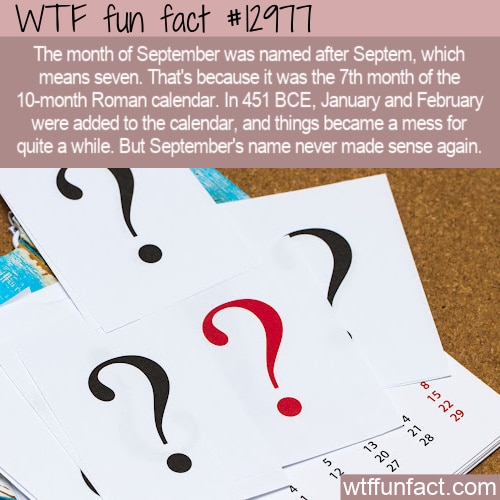 To us, the months of the calendar can mean lots of things. It can signal big changes (new school years, new fiscal years, birthday months, the beginning of Spring, harvest season, etc.). But historically, calendars were also instruments of power. That’s part of the explanation as to why September isn’t the 7th month of the year anymore.

What does September mean?

Our month of September comes from the ancient Roman calendar. The month named Septem literally meant “seven” – as in the 7th month of the year.

For much of their ancient history, the Romans has a 10-month calendar. However, to be fair, emperors were always inserting new numbers of days or months named after themselves in there. In fact, the infamous emperor Commodus tried to rename all the months after himself (a measure that was repealed after his assassination).

What did calendars really mean?

People weren’t hanging their calendars on the walls back in the ancient world. They mostly went by the night sky and used the position of the sun and the seasons to figure out what needed to be done in the fields (nearly all society was agrarian at the time).

Those in power – whether it was political or religious power (or both) – used calendars to try to make the world operate according to their whim. And while you can’t change the pace of the seasons or the lunar cycles just by sticking in a random month, you can change things like the time when taxes are due, which can really mess things up for the people around you. Politicians would even try to lose or gain a month to shorten someone’s tenure in power!

So, why isn’t September the 7th month anymore?

Recalling the entire history of the calendar would take a while. Let’s just say there have been plenty of disagreements over the centuries about how many months were needed, how many days would be in each month, when new days should be inserted to keep up with the astrological “calendar,” and what the months would be called.

But the end of September’s literal meaning started in 451 BCE when January and February were added by the Roman ruler Numa Pompilius to create a 12-month year. He added them at the end of the old calendar (which began in March), then switched things around again, but the 12-month idea clearly made more sense because it lined up with the lunar cycles.

The calendar went through many more changes, including the inclusion of the 27/28-day month called Mercedonius at one point. In 46 BC Julius Caesar had enough and reformed the calendar. That didn’t mean there weren’t tweaks here and there after that, but there’s a reason we refer to our current calendar as the Julian calendar.

It’s just that no one really cared that poor September had lost its meaning along the way. — WTF fun facts