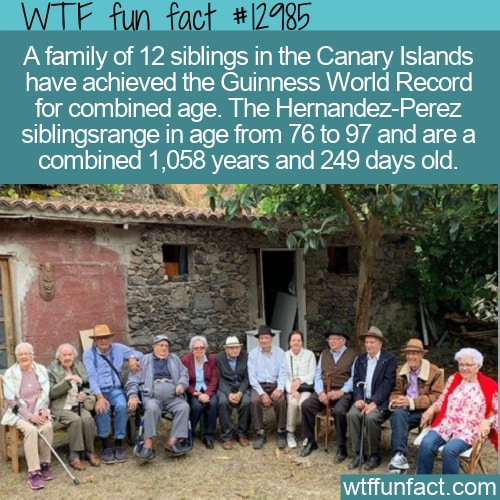 Twelve siblings in Spain’s Gran Canaria (in the Canary Islands) have been granted the new record for their combined age. The world’s oldest siblings (in terms of combined age) were 1,058 years and 249 days old as of the moment their record was confirmed.

That’s A LOT of family reunions.

Earning the record for oldest siblings

The family said in a statement that “It all started as a joke during a family reunion in June. Then, after seeing a newspaper article titled ’12 siblings count more than 1000 years,’ we started gathering information and reached out to Guinness World Records.”

According to the Guinness Book of World Records, the Hernández-Pérez family lives in the town of Moya, on the island of Gran Canaria, Spain. lives a very special family.

Their record is for the highest combined age of 12 living siblings, and they surpassed the previous group by a whopping 16 years!

Parents Modesto Hernández and Martina Pérez raised their family in Moya, and all 12 children have spent their entire lives there. Their seven sons and five daughters range in age from 76 and 98 years old.

The siblings’ ages have been confirmed and notarized by a local official.

According to the Guinness Book of World Records (cited below): “The family is always talking about the record in their group chat, or sharing anecdotes on the record. The accolade had a positive impact on their lives, and further cemented their bond.“

They believe their city is better for having so many large and long-lived family units.

“…other than the great pride and joy that the family found in breaking a world record, they also hope that it will be ‘a recognition and homage for all those families in our city (and, more in general, in the island) that counted 8 or more siblings. Those families fought and sacrificed a lot to improve our present society and life,’ they said.”

Their memories obviously go back to many decades, and life has changed dramatically over their livetimes:

“Among the difficulties of the 30s, 40s and 50s, there was no technology, no public transport and very few doctors,” the siblings recalled. “We had to walk several miles for food and school, and always by foot.”

The siblings recalled working in the fields, helping out in the neighborhood, the home births of their siblings, and plenty of parties during which each child played an instrument for entertainment.