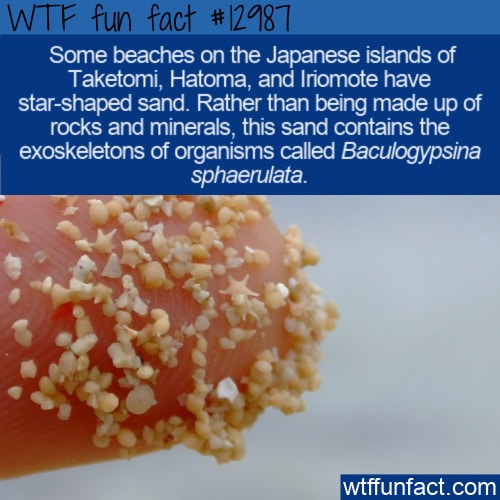 Have you heard of the star-shaped sand in Okinawa, Japan? It’s one of nature’s fun little surprises.

You can find the star sand on the Taketomi, Hatoma, and Iriomote islands of Japan. In many ways, it’s just like other beach sand. Except it has a distinct star shape that you can see with the naked eye.

According to the website Travel Awaits (cited below): “The Taketomi, Hatoma, and Iriomote islands, home to the stars, are all part of the Yaeyama Islands located off the mainland of Japan. They are both the southernmost and westernmost inhabited islands in the country. Unlike the many popular metropolis tourist destinations on the country’s mainland, visitors to these islands experience a tropical retreat. Tourists should come ready both to relax and to discover incredible little stars on the ground.”

But these “stars” are actually exoskeletons.

“Unlike most beaches, the sand on Hoshizuna Beach and other surrounding Japanese beaches is made up not of rocks and minerals, but rather of the remnants of previous organisms. Each little star is the exoskeleton of small, single-celled organisms known as Foraminifera. This means that, though the sand is no longer alive, it once was part of a living organism in the Pacific Ocean.“

These specific organisms are called Baculogypsina sphaerulata, and they’re only found in the coral reefs of East Asia. That makes the star-shaped sand among the rarest in the world.

If you’re interested in other rare types of sand, you can venture to Hawaii’s Papakolea Beach to see olive green sand made of crystallized magma, head to California’s Pfeiffer Beach to see their garnet sand, or plan a trip to New Zealand’s Muriwai Black Sand Beach, which is made up of dark volcanic glass.— WTF fun facts