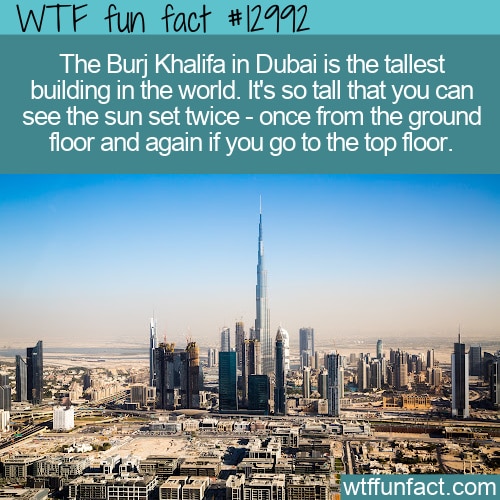 The Burj Khalifa is a skyscraper in Dubai, United Arab Emirates. It has a total height of 2,722 feet (or a little over a half mile), excluding the antenna/spire. It serves as the centerpiece of downtown Dubai and is named after the former president of the United Arab Emirates, Khalifa bin Zayed Al Nahyan. While it holds several world records, one of the coolest things about the building is the Burj Khalifa double sunset.

What is the Burj Khalifa Double Sunset?

Technically, you can experience this phenomenon from lots of very tall structures, but you need to be able to reach the top quickly enough to catch the second sunset.

“The taller the structure and the faster you can get to the top, the longer you will be able to enjoy the second sunset. This happens because the Earth is curved, and by sticking out perpendicular to its curvature, you’ll be able to see more of what lies behind the horizon.”

The Burj Khalifa is one of the best places to see a double sunset because it has two observation decks and an ultra-fast elevator designed to get you to the top (while peering out of the building) in order to get optimal viewing time. — WTF fun facts

Source: “Did You Know The Burj Khalifa Is So Tall You Can Watch Two Sunsets On the Same Day?” — Gizmodo