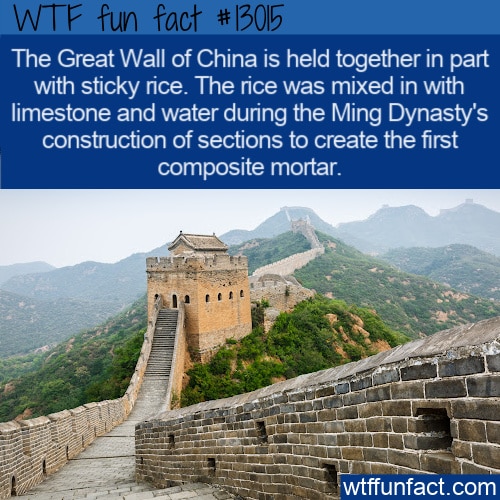 Walls between countries are more symbolic than anything, and that’s true for the Great Wall of China as well. Still, it’s such an epic structure that it took thousands of years to complete. It’s also not actually one long wall but a series of structures. Oh, and it’s held together by sticky rice.

What’s the story behind the Great Wall?

The first emperor of a unified China Qin Shi Huang Di began building the wall, but like many of his monumental structures, it was unfinished by the time of his death. In fact, it wasn’t until several hundred years later that the emperors of the Ming Dynasty (in the 14th – 17th centuries) took up the project again in earnest, building more sections along with the iconic gates and towers.

These emperors built hundreds of miles of the most famous section of the wall, which China has claimed is over 13,000 miles long – but likely includes sections that no longer exist (Chairman Mao encouraged people to take pieces of it to build their homes, for example). It’s a magnificent structure no matter its exact length, even if it didn’t always keep out invaders.

It is, however, held together with sticky rice.

You might be confused if you’ve only had your rice cooked from the instructions on a package of Uncle Ben’s, but Chinese rice is deliciously sticky. It also helps make great mortar.

But don’t make fun of Chinese cuisine – sticky rice is just one part of the limestone mortar used to hold together this structure. This was discovered by scientists at Zhejiang University in China, and the recipe makes it the first example of composite mortar (something we all benefit from today whether we know it or not).

According to Smithsonian Magazine (cited below), the researchers “found that ‘sticky rice-lime mortar has more stable physical properties, has greater mechanical storage, and is more compatible, which make it a suitable restoration mortar for ancient masonry.’”

That makes sticky rice mortar one of the greatest and most enduring (literally) inventions of an already amazing lineage of governments. It is part of the reason structures built during this period are still around, surviving earthquakes and other tests from the elements.