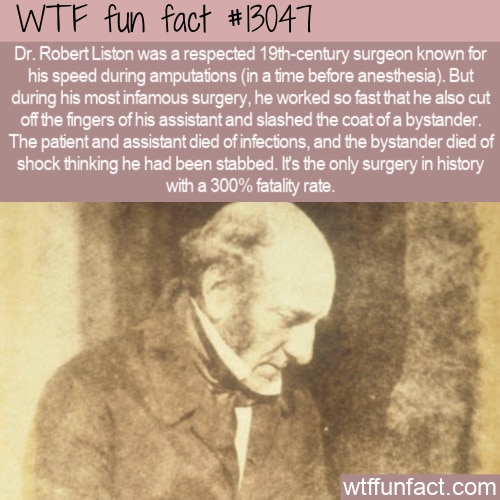 Robert Liston was a respected 19th-century surgeon. In fact, surgical instruments have been named in his honor. And while he might have taken great pride in amputating limbs as fast as possible, the goal was to save the patient from prolonged pain. There were no anesthetics back in that day. The faster the surgery was over, the better. But one amputation went horribly awry, killing 3 people.

The surgery with a 300% fatality rate

While there’s a chance it may be an apocryphal story, Liston’s most infamous amputation involved 3 fatalities. During a leg amputation, he cut so fast that he severed the fingers of his surgical assistant. And while he was switching instruments, he slashed the white coat of a doctor observing nearby.

Many patients died during amputations in the 19th century, so one fatality could be expected. However, the assistant ended up dying of a blood infection. To top it off, the man whose coat he had slashed wasn’t physically injured but ended up dying of shock because he thought he had been stabbed.

That makes this amputation the only one with a 300% fatality rate.

Liston was a show-off, but he was also a great surgeon. He also aided in the introduction of ether as an anesthetic.

During one procedure that lasted only 25 seconds, he gave the patient ether, severed the limb, and when the patient came to he asked when the surgery would take place. This greatly impressed the crowd. (In those days, surgeries took place in operating theaters with many other physicians watching.)

Robert Liston died in a sailing accident not long after that and didn’t get to see the evolution of anesthetics. However, he was remembered not only for being “the fastest knife of the West End” but for his willingness to take on the cases that other doctors would not. — WTF fun facts

Source: “‘Time Me, Gentlemen’: The Fastest Surgeon of the 19th Century” — The Atlantic