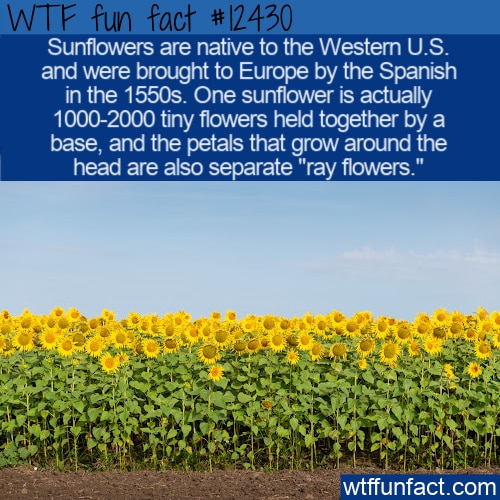 Don’t you just love sunflower season? Ok, it might be a bit too hot for some of us, but these big, happy flowers are a fun way to bring some sunshine to your yard or home.

If you’ve seen the sunflower a lot these days, it’s because it’s also the national flower of Ukraine. Girls would weave smaller varieties into flower crowns, and they’re commonly found on traditional embroidery. But the sunflower originated on the North American continent, in what is not the Western United States. In fact, it’s the only flower used for seed that originated in the US.

It wasn’t until the 1550s that Spanish conquerors brought the sunflower to Europe. Sunflowers have many practical uses since they can be pressed for sunflower oil, and the seeds are edible. Ironically, it wasn’t until the flowers reached Russia that they were seen as beautiful for display.

But the more fascinating thing about the sunflower might just be that – biologically speaking – what we consider to be one flower is actually thousands of tiny flowers. Those little brown things we think of as…well, what do we call those?… Anyway, those are individual flowers! And so are the petals.

That means a sunflower contains thousands (usually between 1000 and 2000) of individual flowers all held together by that impressive receptible base. The brown flowers develop into seeds, while the yellow petals (or “ray flowers”) simply wither.

Another cool fact about sunflowers is that they are heliotropic, which means the flowering head (which we guess is technically the correct phrase for what we refer to as a flower) turns with the sun for maximum exposure.

So if you set a vase of sunflowers on a table near a window and notice them all “looking” outside during the day, don’t assume someone turned the vase! The flower did that all on its own. – WTF fun facts