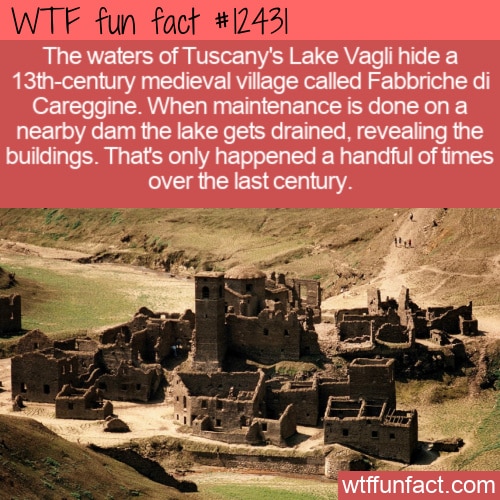 Lake Vagli in Tuscany is a man-made reservoir created in 1946 when a dam was built nearby. At the time, the hydroelectric dam forced the 150 residents of the 12th-century medieval village to abandon it entirely and be relocated to the nearby town of Vagli Sotto.

However, when maintenance is done on the dam, the lake drains, and the village reemerges and becomes a popular tourist attraction. People have only seen the village four times since the dam was built – in 1958, 1974, 1983 and 1994. However, there will be another opportunity in 2023 when 34 million cubic meters of water are removed yet again.

In 1994, the last time the village was visible, nearly 1 million people came to see it, providing a significant tourism boon to the area. Visitors can see medieval homes, bridges, a cemetery, and a church.

If you’re planning a trip to Italy next year, plan to stop in Tuscany’s Lucca province for a look. But you may want to check on its progress first. The lake was supposed to be drained in 2021, and presumably, the pandemic stopped that. It takes an amazing amount of effort to reveal the village though, so the Italians are likely to make a big deal out of it. – WTF fun facts