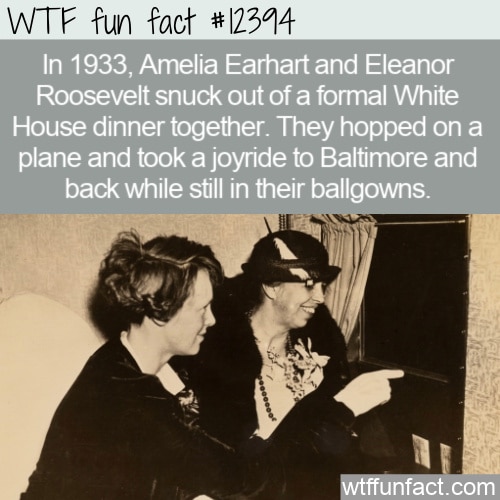 On April 20, 1933, they attended a formal dinner at the White House when Earhart got a little restless and suggested they go on an adventure. The feminist trailblazers grabbed some friends and slipped out of the event in their ballgowns. Then they hopped on a plane to spice up the evening at Earhart’s suggestion.

The plan was to travel to Baltimore and back before dessert, and they headed to the air hangar at Hoover Field and hopped aboard one of Eastern Air Transport’s twin-engine Curtiss Condor planes.

Two of the airplane company’s pilots had to operate the plane, but the women managed to nudge them aside at some point and took over the cockpit, acting as pilot and co-pilot for at least part of the flight.

After the short trip, the Secret Service ushered everyone back to the dinner.

Of course, Earhart would eventually go on her ill-fated trip around the world in 1937, from which she never returned. Roosevelt continued her humanitarian deeds until her death in 1962.

When speaking about their adventurous evening, Roosevelt told The Baltimore Sun: “It does mark an epoch, doesn’t it, when a girl in an evening dress and slippers can pilot a plane at night.” – WTF Fun Facts

Source: Pilots in Evening Gowns: When Amelia Earhart and Eleanor Roosevelt Took to the Skies — A Mighty Girl