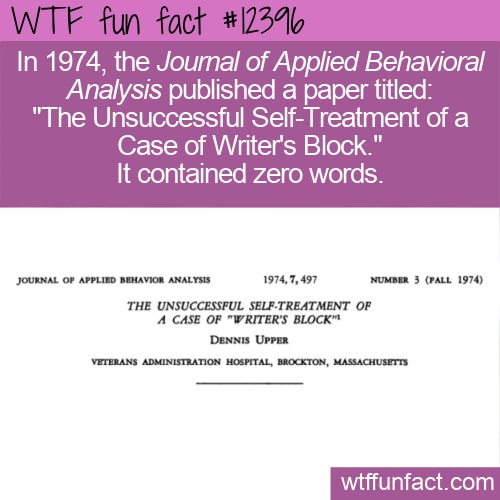 In 1974, a legitimate, peer-reviewed academic journal titled Journal of Applied Behavior Analysis” published a zero-word article titled “The Unsuccessful Self-Treatment of a Case of ‘Writer’s Block'” as a joke. It was “authored” by Dennis Upper, a clinical psychologist at Harvard who was, at the time, suffering from writer’s block.

A joke review was published directly underneath his 1974 article, reading:

“I have studied this manuscript very carefully with lemon juice and X-rays and have not detected a single flaw in either design or writing style. I suggest it be published without revision. Clearly, it is the most concise manuscript I have ever seen-yet it contains sufficient detail to allow other investigators to replicate Dr. Upper’s failure. In comparison with the other manuscripts I get from you containing all that complicated detail, this one was a pleasure to examine. Surely we can find a place for this paper in the Journal-perhaps on the edge of a blank page.”

Ampatzidis, Georgios (November 24, 2021). “The Unsuccessful Self-treatment of a Case of ‘Writer’s Block’: A Replication in Science Education.” Journal of Trial and Error.

Upper passed away in 2018 after an accidental fall down the stairs. According to his obituary: In addition to being a professor and clinician, “Upper was an equally brilliant writer and poet. He edited twelve professional books, wrote more than thirty professional articles, and had his poems and short stories published in more than fifty literary journals. His 2007 memoir Long Story Short — a collection of one hundred vivid, thoughtful, funny, sad, and profound stories from his life — continues to captivate readers.”

Source: The unsuccessful self-treatment of a case of “writer’s block”– Journal of Applied Behavioral Research