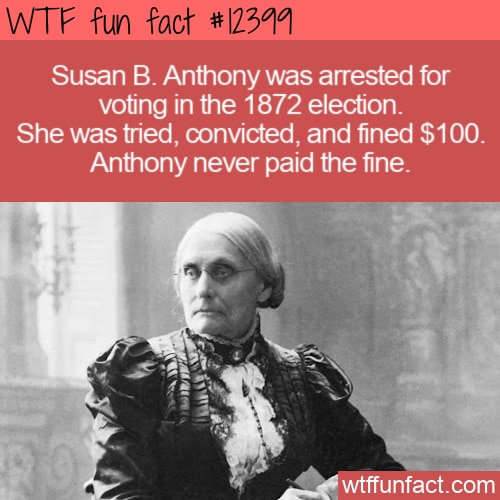 In 1872, voting rights activist Susan B. Anthony demanded that the staff of a voter registration office in Rochester, New York add her to their list of eligible voters.

“I made the remark that I didn’t think we could register her name,” recalled Beverly W. Jones, one of the election officials. “She asked me upon what grounds. I told her that the constitution of the State of New York only gave the right of franchise to male citizens. She asked me if I was acquainted with the 14th [A]mendment to the Constitution of the U.S. I told her I was.”

The three election officials present at the time eventually accepted her registration and she and 14 other women went to the polls on November 5, 1872, to vote in the presidential race between Ulysses S. Grant and Horace Greeley. Of course, at the time, her actions were still technically illegal. Anthony was the only one arrested and she was found guilty in a trial that took place the following June.

After her two-day trial, Anthony was given a $100 fine (equivalent to over $2k today). Instead of paying, she told the judge, “I shall never pay a dollar of your unjust penalty.” And she never did.

Anthony died at age 86, 14 years before the 19th amendment was ratified, giving some U.S. women the right to vote.

Despite what some may think, Anthony wore her arrest and refusal to pay the fine as a badge of honor. Yet, on the 100th anniversary of the ratification of the 19th amendment, then-President Donald Trump posthumously pardoned her.

Source: In 1872, Susan B. Anthony Was Arrested for Voting ‘Unlawfully’ — Smithsonian Magazine