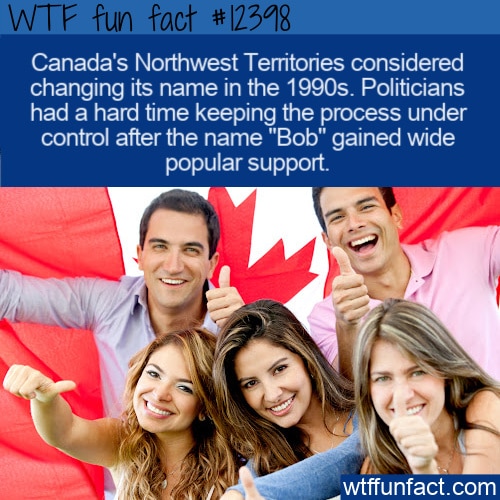 In 1999, Canada’s Northwest Territories was split in two. The eastern region became Nunavut, a territory made up of the Inuit (known to some as Eskimos). However, the other half of the 1.3 million-square-mile territory wanted to come up with its own name.

Politicians turned to residents to come up with new names, which may not have been the best idea in retrospect. Before the Boaty McBoatface debacle, Canadians proved that the people don’t always know best when they rallied behind the name “Bob” for their territory.

According to The Baltimore Sun, other contenders included Restavit, Alluvit, Fullavit, Tundraland, Freedom Territory, Eskimo Pie, and Snobound. So, in some respects, it could have been worse.

While the internet wasn’t as ubiquitous as it is today, an online campaign on behalf of Bob contained a list of reasons why citizens thought it was a good idea, such as: “‘Bob’ sounds the same in each of the official languages of the Northwest Territories” (these include English, French, Cree, Inukitut, and Dene).

Politicians were not so good-natured about the fun and games:

“The campaign to make the name of the Western Territory into ‘Bob’ is not humorous,” said J. Michael Miltenberger, member of the territorial assembly. “This campaign is hurting the reputation vTC of residents of the Western Arctic across North America and beyond.” – WTF Fun Facts