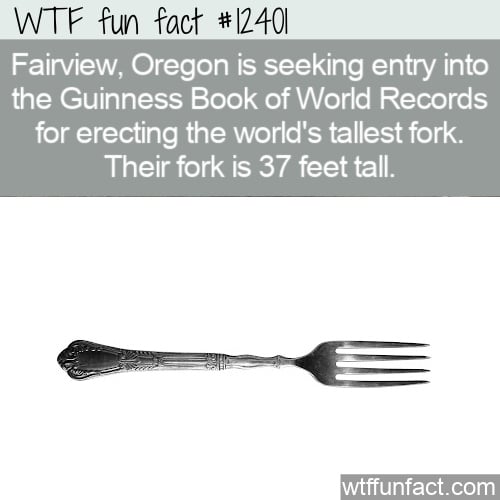 In what we hope is a mere formality, Fireview, Oregon is trying to confirm that the 37-foot-tall fork they’ve erected on the site of their new food truck plaza is the world’s largest. Their goal is to earn a spot in the Guinness Book of World Records with the decidedly non-utilitarian utensil.

“Tuesday, February 15, the World’s Tallest Fork, to be determined by Guinness Book of Work Record, will be arriving in Fairview to be erected in its new home between 9 AM and 11 AM. This 37-foot tall stainless steel “Fork” will be the art piece placed in the public plaza at the entrance to the new Fairview Food Plaza at the corner of Halsey Street and NE 223rd Ave. The “Fork” will be traveling from McMinnville, where it was created.

The Fairview Food Plaza is a public-private partnership between the Fairview Urban Renewal Agency, property owner Denise Arndt and Plaza operator Justin Hwang.  The Plaza is planning to open in April 2022 with 16 food carts featuring a vast variety of foods.  The dining hall courtyard and public plaza will be a destination for the community and cultural events for years to come. The development will include a farmers market anticipated to start at the end of June 2022.”

By way of explanation, Mayor Brian Cooper told KATU-TV: “So, the fork came about because we wanted something on the corner, whether it was a water tower or a windmill or some sort of piece that’s going to be on the corner, and then one of the design teams said, let’s just put a fork here and we’ll come back to it. And over the course of a couple months, it just kind of stuck in the brain…And you can come up with an entire marketing scheme of ‘Take a left at the fork,’ ‘The Fork in Fairview.”

The current record holder for the world’s tallest fork is Missouri, with a utensil that stands 35 feet tall. So, fingers crossed that no one has secretly erected a larger fork in the meantime! – WTF Fun Facts