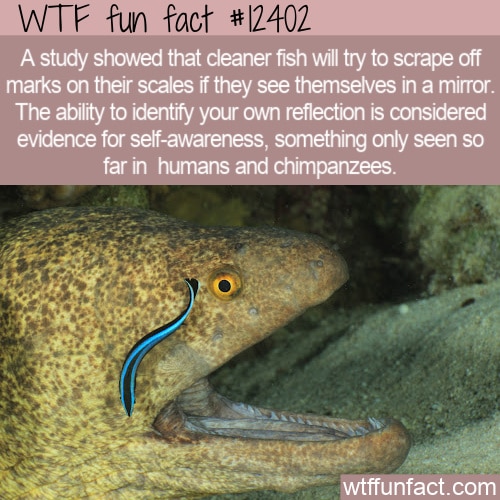 An experiment published in the journal PLOS Biology showed for the second time that fish could recognize themselves in the mirror. Scientists injected the cleaner fish (Labroides dimidiatus) with a substance that “tattooed” them with brown marks on their scales. When they spotted their reflections, they were triggered to try and scrape off the marks.

This goes far beyond simple mirror recognition. Fish mirror self-recognition (MSR) would give the creatures a characteristic only shared by two other creatures – humans and chimpanzees.

Previous research drew the same conclusions but was not conclusive since the sample size was small and not all of the fish exhibited the behavior. But the recent replication study remedied those inadequacies and added more evidence to the theory that fish are self-aware.

Not everyone is convinced, though. Some researchers are still skeptical that the behavior was not the result of self-awareness but rather a physical reaction to being tattooed by the scientists.

When interviewed by IFL Science, the lead researcher, Professor Masanori Kohda of Osaka City University, said, “During the long 50-year history of mirror tests of animals, this study is the first test that uses the mark to which the subject animals pay attention. Hence, this fish shows the highest passing rate for mark-test, exceeding that of chimpanzees, dolphins, and elephants.” – WTF Fun Facts

Source: Fish Cleaning Themselves In A Mirror May Have Just Demonstrated Self-Awareness — IFL Science