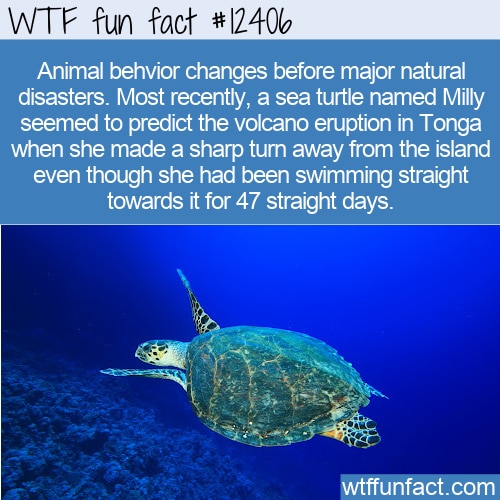 Animals seem to know when something’s up with Mother Nature. Certain out-of-character animals behaviors after precede storms, earthquakes, and more. Now, there’s evidence that Milly the Sea Turtle knew that the Hunga Tonga-Hunga Ha’apai volcano was about to erupt.

She was released by scientists in Australia wearing a tracker, and for 47 days she swam straight for the tiny island of Tonga. But the day before the earthquake, something made her do a sharp turn directly away from the island…like she knew it wasn’t a safe place.

While it’s just speculation, for now, Tilly also diverted her journey back to Australia right before a small earthquake occurred near the Great Barrier Reef. Again, she seemed to send something was about to go wrong in that direction.

Research has been done on the ability of whales, dolphins, and even goats to sense seismic activity, but this was the first time the behavior was observed in sea turtles.

Of course, turtles have no real way of explaining their behavior to humans, so we won’t be using Tilly as an earthquake or volcano predictor any time soon. But it is interesting to have more evidence that animals have some sort of sixth sense when it comes to potentially dangerous natural events. – WTF Fun Facts