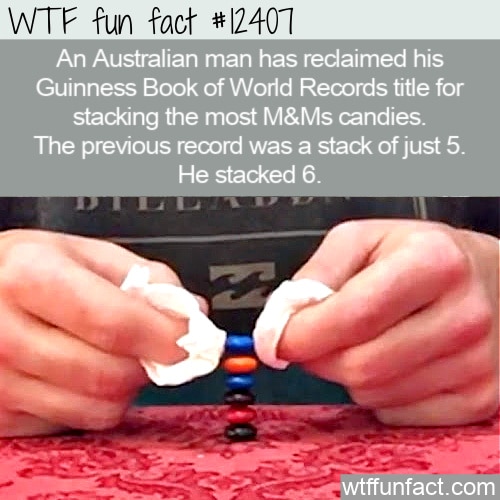 Brendan Kelbie is a serial world record breaker who has once again entered the record books with his stack of 6 M&Ms. It doesn’t sound like a lot, but the previous record was 5 and we suggest you give it a try if you think you can do better.

Kelbie recaptured his title from co-champs from Britain and Italy who had done the five stack. His tower held unaided for 10 seconds at his home in Queensland, the Guinness World Records said.

“I’ve decided to break this record because I’m a serial record-breaker, and I am a versatile world record holder,” Kelbie told Guinness.

Kelbie’s other records are equally unique: he’s done the most drumstick flips in 1 minute (98), balanced a basketball on a pair of glasses the longest (29.67 seconds), built the tallest tower of dice on the back of a hand while blindfolded, and spun a basketball on his nose the longest (9.57 seconds).

We think these world records are getting a little silly but to each their own! We certainly can’t do any of those things. – WTF Fun Facts