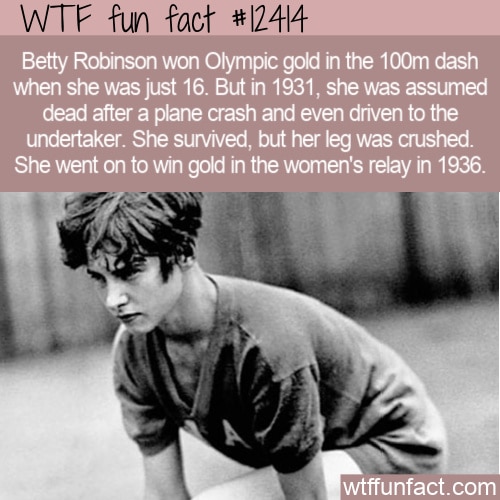 You may not know the name Betty Robinson (or, perhaps, you do!), but she’s an Olympic success story for the ages – and a weird one at that.

Betty “Babe” Robinson grew up in a small town south of Chicago called Riverdale. She had many natural abilities, including running. She was fast.

Her Biology teacher, Charles Price, noticed how fast she was when he was her run down the hallway. He timed her, and after clocking her speed, he encouraged her to train with the boy’s track team a few towns over at Thornton Township High (there were no girl’s track teams in that area at the time).

She soon ran in regional events and kept pace with female US world record holders. After that, she was invited to join the Illinois Athletic Women’s Club. Then she beat the world record and moved on to the US Olympic trials.

In 1928, she was selected to represent the US in the Amsterdam Olympics, the first Olympics that allowed women to compete in track and field. She won gold in the 100m at the age of 16. At the time, she has only been running competitively for five months.

(A fun fact for those old enough to remember: Those were the same games in which swimmer Johnny Weissmuller competed. After that, he would go on to his iconic role as Tarzan!)

Babe Robinson returned to her country, state, and town a hero and continued to set records until one fateful day in 1931. Robinson wanted to cool off on a hot day, but her coach wouldn’t let her swim because he insisted it would interfere with her training. So she asked her cousin to take her flying in his small plane to get some reprieve from the heat. Then, disaster struck.

The plane took a nosedive into a field, and the wreckage indicated no survives among the mangled metal and bodies. The man who pulled her out assumed she was dead and put her in the back of his vehicle to drive her to the undertaker.

But she was alive (as was the pilot)! Unfortunately, Robinson suffered injuries to her head, hip, and arm – and badly broke a leg. She also had internal injuries and drifted in and out of a coma for days.

By all accounts, that should have ended her running career. After surgery to put a pin in her left leg, it was shorter than her right leg. She walked with a limp and was told her days of competition were over.

But Babe Robinson wasn’t about to let doctors tell her what was possible. She missed the 1932 Olympic Games but made the team again in 1936 when they were held in Berlin. She couldn’t run as fast, but it was still fast enough. The only problem was she was no longer physically able to crouch down in the starting position – something required of those running in the 100m race.

That’s when she decided to join the women’s 4x100m relay team, a race that didn’t require her to crouch. She was 24 years old and, at the time, the oldest member of the team. The Germans were heavily favored to win but got disqualified on a handover of the baton. Meanwhile, Robinson handed the baton off to Helen Stephens, who had just won the 100m (the race Robinson so dearly wanted to run in). The US team took the gold, and Robinson became a two-time gold medal winner after being assumed dead in that plane crash.

This time, her victory took a back seat to the amazing feats of runner Jesse Owens, who won an astonishing four gold medals. But Betty “Babe” Robinson would remain involved in the sport for decades, later being inducted into the USA National Track & Field Hall of Fame and even carrying the torch for a bit at the 1996 Olympic Games in Atlanta when she was 84.

She passed away in 1999 at age 87 after suffering from cancer and Alzheimer’s, but she remains the youngest woman in history to win gold in the 100m.

If you want to know more, writer John Carroll wrote an incredible story about her in Runner’s World in 2019, and you can read it by clicking here. – WTF Fun Facts

Source: “Betty Robinson: how the fastest woman in the world came back from the dead” — Runner’s World