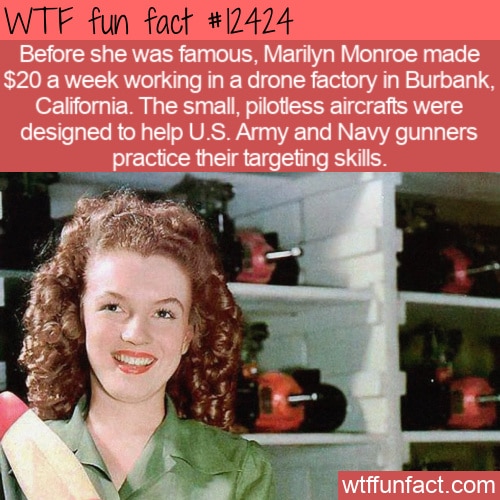 At 18-years-old, Norma Jeane Dougherty was the wife of a U.S. merchant seaman who worked in a factory for Radioplane in Burbank, California. Founded by actor Reginald Denny, the company made remote-controlled, pilotless aircraft – also known as drones.

Of course, in the 1940s, the word “drone” didn’t carry the baggage it does today. These drones were used to perfect the targeting skills of U.S. soldiers in the Army and Navy. Then came D-Day and Operation Aphrodite, in which similar drones were packed with explosives and used to bomb Nazi sites after the pilots ejected.

Back on the homefront, Norma Jean Dougherty ignored advice to quit her 10 hour/day drone factory job (where she sprayed and inspected parachutes) for fear it would ruin her hair and skin. Already a beauty, she was later named “Queen” of the company picnic and awarded a $50 war bond. She continued to work.

A year later, Norma Jean was photographed in color film (rare at the time) while holding a Radioplane propeller to show the role of women in the war effort. It’s part of what helped turn her into a star. She would soon change her name to Marilyn Monroe and leave the factory for Hollywood. – WTF Fun Facts