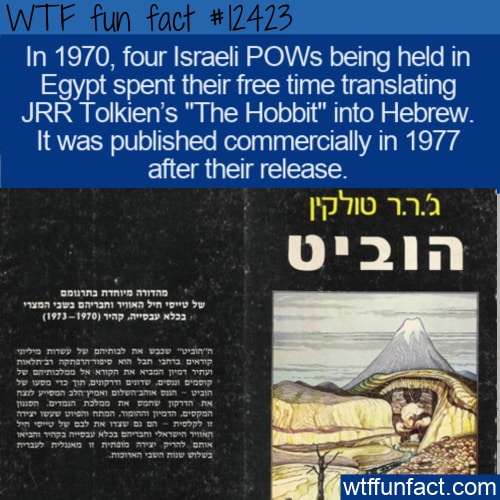 In 1970, ten Israeli Air Force pilots and their comrades were captured during the War of Attrition between Israel and Egypt, Jordan, the Palestine Liberation Organisation (PLO), and their allies. The conflict lasted from 1967 to 1970, but the POWs were not released until 1973.

While in captivity, the men were eventually allowed to spend time together, albeit in a cramped cell. One distraction from their years-long nightmare came in the form of a book that one of the pilots was carrying. Yitzchak Fir’s brother had sent him a copy of J.R.R. Tolkien’s The Hobbit: Or There and Back Again. However, the book was in English, and not all captives could read it.

That’s when four of the pilots who could read English decided to translate the book for their fellow captives. Avinoam Kaldes, Rami Harpaz, Menachem Eini, and Yitzchak Fir first translated select parts and expressions. But once they realized it gave them a sense of purpose and a means of distraction. So they decided to translate the entire book from beginning to end.

It was a difficult task (and if you’ve read The Hobbit, you know that the poems in the book make translation particularly difficult). But working in pairs and editing the final draft, they finally got it done in four months.

It’s by no means the best Hebrew translation of The Hobbit, but it has the most remarkable story behind it. Their translation was formally published in 1977 by Zmora Bitan Publishers (in part with funding from the Israeli Air Force). – WTF Fun Facts

Source: “Translating “The Hobbit” in Captivity” — The Librarians