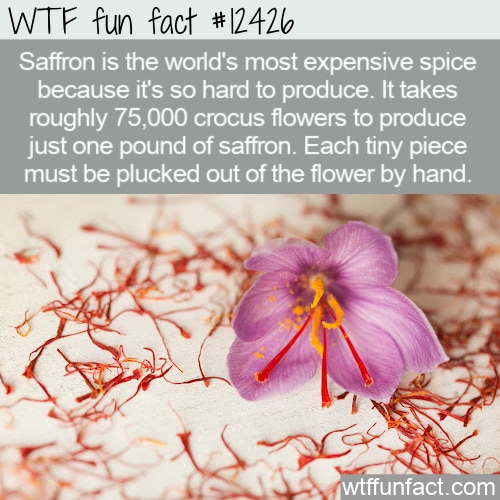 Have you ever gone to the grocery store to pick up some saffron for a recipe only to find that they don’t even carry it?

Then, maybe you head to the specialty grocery store only to find that a mere pinch of the stuff is $10 or $20!

Well, there’s a reason for that. Saffron is a highly labor-intensive spice to produce. It’s made from the stigmata (those little bits at the end of the red pistils) of crocuses. Next time those tiny purple flowers start budding at the first sign of spring, take a look and see just how tiny those are – each flower has only 3 of them.

Amazingly, it takes around 75,000 crocus flowers to produce just one pound of saffron. That’s part of the expense, but if you look closely, you’ll see that there’s no way to get the saffron out except by lightly picking them out one by one and by hand. They’re just so delicate. So the labor that goes into this is also costly.

Despite its rarity, saffron has been used for thousands of years. The Greeks and Romans used it as perfume, while Indians used it for dye, and the Chinese have used it in medicine.

You’ll find it in many traditional recipes from the Middle East and parts of Europe. So next time you go to make a Moroccan tagine, make sure you prepare yourself for the sticker shock in the spice aisle. – WTF Fun Facts

Source: “Why Is Saffron So Expensive?” — Encyclopedia Britannica