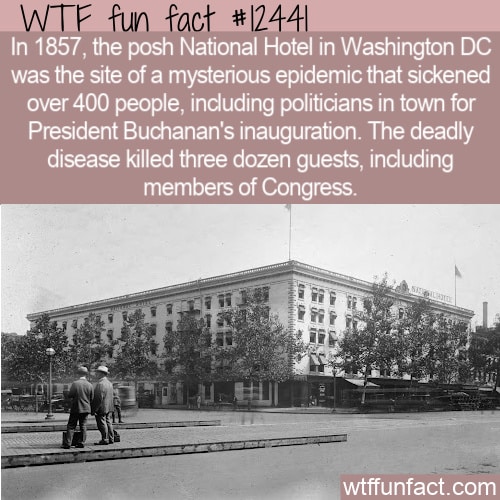 Once the poshest hotel on Pennsylvania Avenue, the National Hotel was at the center of a nationwide mystery after a disease outbreak among its guests in 1857. According to records from the U.S. House of Representatives, almost three dozen people died and 400 people were sickened by a mystery ailment that continued to plague guests (and lead to their deaths) years after their 1857 stays at the hotel.

Founded in 1827, the National Hotel was located between the White House and the Capitol, catering to Members of Congress. “Apart from the Capitol and the White House, there is no building in this city so historic as this,” remarked the Washington Post in 1930. “For more than half a century the history of the Nation was made there.”

But in 1857, President-Elect James Buchanan was staying at the hotel prior to his inauguration, as were many other politicians due to attend the event. Even he was sickened but made a speedy recovery.

At the time, some reported that the outbreak was actually the result of arsenic poisoning in the water. Buchanan was from Pennsylvania but held so-called “Southern beliefs” at the time when it came to slavery. After sensationalized news stories were published, people suspected a murder plot by radical abolitionists, but there was never a speck of evidence that it was anything other than an infectious disease outbreak.

These days, we understand a lot more about how infectious diseases work, and those who have examined records of the symptoms think it was likely mild cholera or (more likely) dysentery.

Dr. D.H. Storer was a National guest and victim who shared his symptoms with the National Intelligencer: “A dreadful nausea has been, in my case, the very worst and most miserable attendant upon this complaint. I have felt it almost all the time from the first till now. If I were even to-day to take an ounce of beef steak, or that amount of any animal food into my stomach, my experience thus far is that I should suffer for hours from this horrid nausea.”

Most guests were infected in March, around the inauguration. However, that’s when the hotel was most crowded. It disappeared soon after guests from that event went home and never happened again. However, among those who died were Rep. John Montgomery of Pennsylvania and Rep. John Quitman of Mississippi.

The hotel continued to operate for years until it could no longer compete with the grander establishments being built around it. The building was demolished in 1924. – WTF fun facts