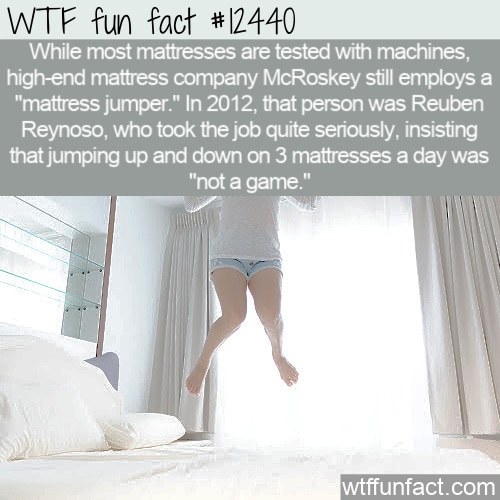 There are hundreds of mattress companies flooding the market today, and many can even be delivered by mail. However, there are still some artisan mattress makers out there and McRoskey Mattress Works in San Fransicso is one of them. Their classic mattress may run you anywhere from $1,600 to $4,500, but you can be sure it’s been tested well – by a pair of human feet, in fact.

The world took an interest in the factory back in 2012 when SFGATE published a story about them and one of their employees, Reuben Reynoso. Reynoso is the man who jumps on the mattresses to ensure they can stand up to everything from child’s play to…well, whatever else it is you do on your mattress.

While a grown man being paid to jump on mattresses for a living might elicit a chuckle, Reynoso wanted people to understand that his job was an important one. “It’s work,” he told SFGATE in 2012. “It’s not for everybody. There is a right way and a wrong way to do it.”

While we didn’t know there was a “right” way to jump on the bed, Reynoso isn’t doing this for fun and games. It’s his job. “This is not a game. Not to me,” he insisted. And we believe him. After all, even if you were living your dream at your job, after a while it all becomes a serious task. But that doesn’t mean we’re not a little jealous of the free and knee-friendly cardio he gets at work.

To be fair, the task does sound like it can get tedious. As SFGATE noted in their article:

“Jumping on a mattress is one of the final steps in making a handmade mattress…a machine cannot do what Reynoso and his toes can do, which is to expertly compress no fewer than 28 layers of fluffy cotton batting while seeking to detect pea-size mattress lumps or other imperfections…”

While it’s unclear if Reynoso is still with McRoskey or if they still employ a person to test their mattresses “by foot,” we’d like to think it’s all still going strong. The mattress company sure is. They’ve been in business since 1899, surviving the Great San Francisco Earthquake and Fire of 1906 and everything that’s come after. – WTF fun facts