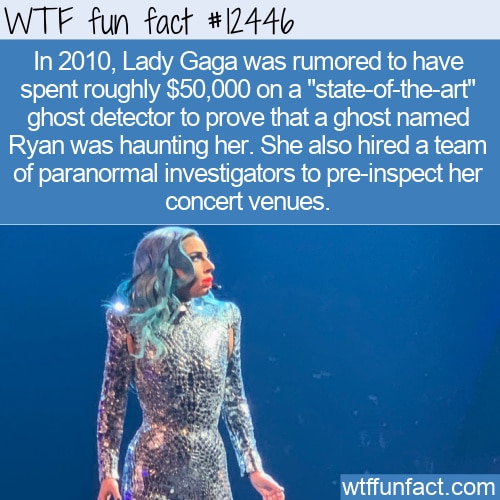 While we don’t quite know when or why “Ryan” the ghost chose Lady Gaga to haunt, it seems plausible that rumors of her purchase of machinery to detect him is true based on past interviews.

Apparently, Ryan followed Gaga around wherever she went, which she found pretty “annoying.” She tried contacting a medium to stage a séance and communicate with him, but apparently, that wasn’t enough.

Now, granted, if we were convinced we had a pestering ghost, we’d probably try to get rid of it too. But we don’t exactly have Lady Gaga’s funds, so we’d have to pass on the $50,000 state-of-the-art Electro Magnetic Field meter. We’re not sure if that got rid of Ryan, but sources also told celebrity news magazines that she would have a team of paranormal investigators on hand to assess each concert venue she was about to perform in.

Frankly, we’d like to know more about what they thought they found. How many ghosts hang out at Madison Square Garden, for example?

Lady Gaga is also rumored to believe that she’s is the reincarnated spirit of a dead aunt.
– WTF fun facts