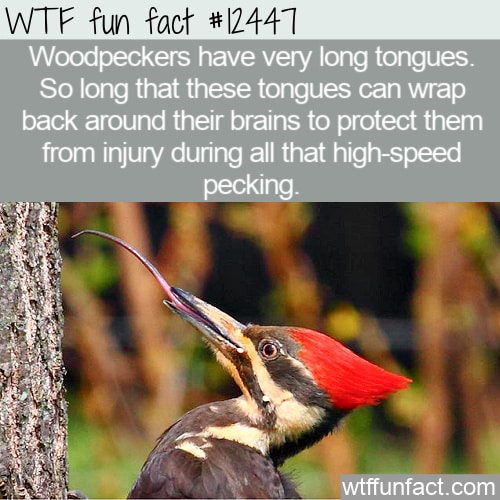 We never really thought about it up until now, but it makes sense that woodpeckers would have to have some kind of mechanism to protect their brains from getting tossed around in their skulls while they hammer away. But in 2010, a team of Chinese scientists figured it out – and it’s fascinating.

To be honest, we didn’t even realize woodpeckers have such long tongues. But doing all that pecking is a way to chip into beetle grub nests, and their long tongues allow them to get in there without having to bash a big old hole in the tree like the Kool-Aid Man.

A woodpecker’s head strikes with around 1,000 times the force of gravity, about ten times more than what would definitely kill a human.

Their sharp beaks help them out a lot, as do their strong neck muscles, but up until relatively recently, no one knew how their heads could absorb the shock of that motion.

Source: “Why woodpeckers can hammer without getting headaches” — Birdwatching Daily