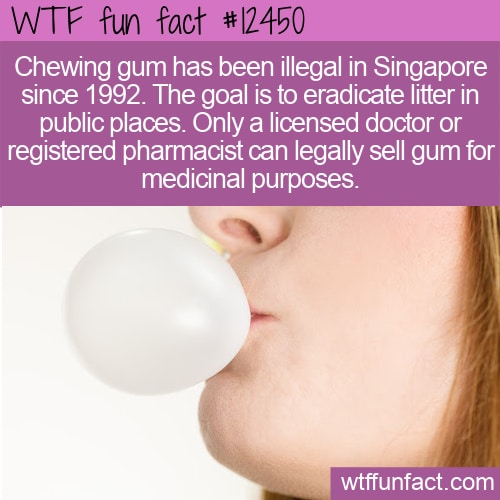 Have you ever sat on a park bench or at a table in a public library only to have to Google “how to get gum off clothing” later on? For some reason, it’s one of those things that people still feel free to stick wherever they’d like. And now that we’ve spent the last few years learning so much about germs, it seems extra disgusting.

Well, Singapore is having none of it. None at all. To keep the country free of the gummy scourge, they’ve banned it altogether. You can’t import it or sell it. So any gum you get in Singapore is either illegal smuggled in or medicinal in nature.

The gum ban was introduced in 1992 by Singapore’s first prime minister Lee Kuan Yew. It became one of the only things foreigners knew about the country at the time, which was reportedly pretty annoying for the leader. But his goal was to create a today, pristine country that would turn into an international business hub and bastion of good behavior.

“We were called a nanny state,” Lee told the BBC’s Peter Day in 2000. “But the result is that we are today better behaved and we live in a more agreeable place than 30 years ago.”

Now, if you’re over 40, you may remember the story of American teenager Michael Fay. He was sentenced to 6 lashes with a cane (a pretty severe form of corporal punishment) in Singapore. It caused a strain in international relations between Singapore and the U.S. But, in fact, Fay was being punished for a ten-day vandalization spree during which he spraypainted cars and damaged and stole road signs. It had nothing to do with gum. In fact, caning has never been a punishment for gum chewing in Singapore.

Singapore has some other tidiness and good behavior laws as well, such as bans on graffiti, jaywalking, spitting, and everyone’s personal favorite “expelling mucus from the nose” (in other words, blowing snot rockets). Frankly, we’d be into banning that in public as well.

Another fun fact? You are legally required to flush a public toilet after use in Singapore.

Ok, so back to the gum. After so many years of having the law in place, Singapore has relaxed a bit. But that’s probably because no one really wants to risk it anymore. Since it’s illegal to sell it, the only gum you’ll see is at pharmacies. Licensed doctors and registered pharmacists can sell medicinal gum (such as nicotine gum) with no issues. But if you get caught spitting it out on the street, you can expect some trouble. – WTF fun facts